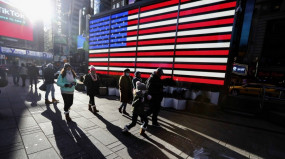 Digital Desk, Washington. The average age of living in the US declined for the second year in a row in 2021, the biggest drop in nearly 100 years.

In 2019, the probable age of someone born in the country was around 80 years, Xinhua news agency quoted a National Public Radio report. The report said that due to the Kovid 19 epidemic in 2020, the average age of living has come down to 77 years and in the last year i.e. 2021 it has fallen to 76.1 years. According to an analysis by the Centers for Disease Control and Prevention (CDC), the most likely age decline in 2021 was seen among American Indians and Alaska Natives.

The median age for this group fell by two years between 2020 and 2021, from 67.1 in 2020 to 65.2 in 2021. The CDC figures also highlight a significant difference in the mean age between men and women. The average age for men fell by almost a year to 73.2 in 2021, while life expectancy for women fell by 10 months to 79.1 years. Deaths from heart disease, chronic liver disease and cirrhosis and suicides were also significant contributors.

The BBC reported that, the median age in the US is among the lowest among developed countries around the world. In the UK, the average age was around 79 for men and 82.9 for women in 2020, falling for the first time in 40 years. According to the latest available data from the World Bank, Hong Kong and Japan have the world’s highest median age at around 85 years, followed by Singapore at 84 years. The average age in countries including Switzerland, Australia, Norway is about 83 years.