Brahmastra created history on the first day of release, got bumper opening, know how much was the box office collection 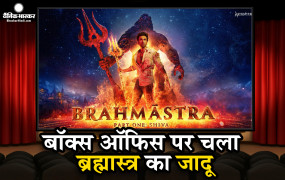 Digital Desk, Mumbai. Director Ayan Mukerji’s much awaited film Brahmastra starring Ranbir Kapoor and Alia Bhatt has been released. On one hand, a boycott campaign is being run on social media regarding the film. On the other hand, it is getting a lot of love from the audience. On the very first day of its release, the film has made a record collection at the box office. Let’s know the collection of the first day of this sci-fi film ..

what is the first day’s earnings

Made in a budget of more than 400 crores, this film has collected a net of about 36 crores and gross collection of 43 crores on the first day. According to the report of Box OfficeIndia.com, making such a collection for a non-holiday release film is good news for Bollywood. According to the report, Brahmastra is the only non-holiday movie after Bahubali 2 which has earned so much on its opening day. The film’s great opening at the box office is expected to earn up to 100 crores by the weekend. Although these are preliminary figures, there is still time to come to the correct figures.

The film did a great collection in South also

Brahmastra has been released in 4 languages ​​of South including Hindi Tamil, Telugu, Kannada and Malayalam. The Hindi version of the film has collected around Rs 32 crore on the first day. At the same time, around Rs 3 to 4 crore has been earned from its South version. This collection is great while watching any Bollywood movie. The film has done well especially in its Telugu version. According to reports, the film has earned around 9 to 10 crores including all the South versions of the film.

Many Bollywood films left behind

Brahmastra has left behind many blockbuster films of Bollywood by doing business of about 36 crores on its opening day. The film has surpassed all-time blockbuster movies like Sanju, Tiger Zinda Hai, Chennai Express and Ek Tha Tiger in terms of opening day earnings. Let us tell that this 2 hours 47 minutes long film has been released in about 5 thousand screens in India and about 4 thousand screens in overseas.

It is worth noting that apart from Ranbir and Alia, Amitabh Bachchan, Nagarjuna and Mouni Roy have acted in the film. At the same time, Shahrukh Khan also has a cameo in the film.

Share
Facebook
Twitter
WhatsApp
Linkedin
Email
Telegram
Previous articleCBSE has released the schedule of marks revaluation, register till this date
Next articleTina Dutta did yoga while lying on the dining table, see photos