Diwali 2022: Diwali celebrated with pomp across the country, despite the ban in Delhi, crackers burst 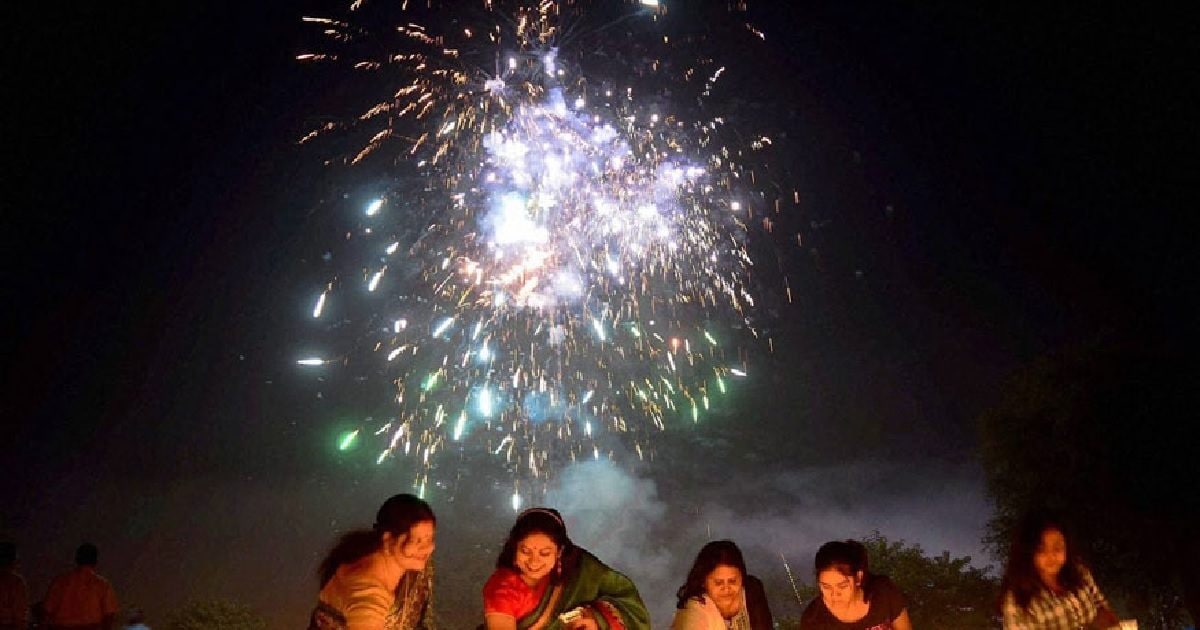 New Delhi. Diwali was celebrated with full pomp and enthusiasm across the country on Monday after a simple festival for the last two years due to the Corona virus epidemic. During this, buildings and houses all around were illuminated with colorful lights and diyas. On the occasion of Diwali, people greeted each other by distributing sweets and devotees gathered in the temples too. At the same time, in violation of the ban on bursting of crackers in the national capital Delhi, people burst firecrackers in many areas on the night of Diwali.

Delhi Environment Minister Gopal Rai said last week that bursting crackers on Diwali in Delhi could attract a jail term of up to six months and a fine of Rs 200. Despite this, people started pyrotechnics in many areas of the city including South to North East and North West Delhi as soon as evening. At some places, loud crackers were also burst.

The festival of Diwali is being celebrated across the country on Monday. The bursting of crackers on this day is an old tradition, but city officials said the decision to ban fireworks was taken due to environmental and health concerns.

President and Prime Minister congratulated Diwali
The festival of Diwali is celebrated since Lord Rama along with his wife Sita and brother Lakshmana returned to Ayodhya after defeating Ravana during 14 years of exile and is seen as a celebration of the victory of good over evil. On this occasion, President Draupadi Murmu, Vice President Jagdeep Dhankhar and Prime Minister Narendra Modi greeted the countrymen on the occasion of Diwali and wished for peace and prosperity.

On the other hand, like previous years, Prime Minister Narendra Modi celebrated Diwali with the soldiers of the army. This time the Prime Minister reached among the soldiers in Kargil. Addressing the jawans, the Prime Minister said that India supports peace and has always considered war as the last option, not the first, but the armed forces of India have the strength and strategy to give a befitting reply to the evil eye on the country. .

PM Modi said that India is against war. However, he also underlined the need for strength to ensure peace and said that India’s growing power increases the chances of peace and prosperity in the world. He said that the whole world is looking towards India, which is a ‘balancing force’.

Sweets distributed at Attari-Wagah border
The Border Security Force (BSF) on Monday distributed sweets to Pakistan Rangers on the occasion of Diwali at the Attari-Wagah border in Punjab. Officials said that a BSF commandant rank officer gave sweets to the Pakistan Rangers at the joint check post. According to the officer, the commandant was accompanied by other personnel of the force. On this occasion the officers of both the forces shook hands and greeted each other.

Delhi’s Lieutenant Governor VK Saxena and Chief Minister Arvind Kejriwal wished the people of the city happiness and prosperity on the occasion of Diwali. At the same time, Delhi’s air quality deteriorated to ‘very poor’ on Monday due to increasing incidents of crackers, stubble burning and extreme weather conditions.

Firecrackers burst in spite of ban in Delhi
However, despite the ban, people started fireworks in different areas of the city from 6 pm onwards. In South Delhi’s East of Kailash, Nehru Place, Moolchand and other areas, the sound of bursting of firecrackers was heard from the evening itself. A person living in a colony of Burari said, ‘They are educated people, yet they are doing this. What will the children learn from this?

The situation remained the same in many areas including Laxmi Nagar, Mayur Vihar, Shahdara, Yamuna Vihar in East and North East Delhi. However, some residents said that this time the sound of firecrackers is less than last year. Fa

Air quality expected to deteriorate
Experts have feared that the air quality may worsen if more crackers are burst again this year.

The Air Quality System and Weather Forecasting and Research (SAFAR) had earlier predicted that if crackers are burst this time as in the previous year, the air quality may reach ‘severe’ level on Diwali night and another The day may remain in the ‘red’ zone.

Share
Facebook
Twitter
WhatsApp
Linkedin
Email
Telegram
Previous articleAuthorities Identify One Victim in Dallas Hospital Shooting
Next articleT20 world cup 2022: Rain snatches 1 point of South Africa, lest it be out of the race for semi-finals