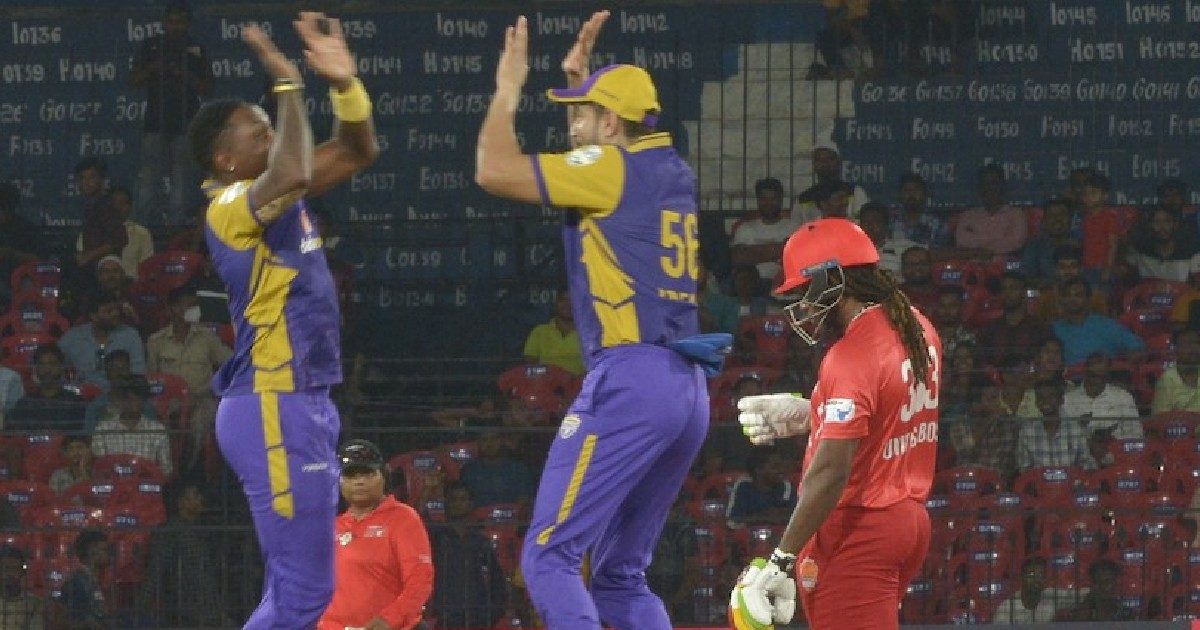 Bhilwara Kings defeated Giants by 57 runs in the 9th match of LLC.

With the second win, Irfan Pathan’s Kings have reached the second place in the points table.

Cuttack. Despite the presence of explosive batsman Virender Sehwag and Universe boss Chris Gayle in the Gujarat Giants team, Bhilwara Kings defeated Giants by 57 runs in the 9th match of the Legends League Cricket (LLC) at the Barabati Stadium on Tuesday. The Kings’ batsmen performed well and while batting first, the score crossed 200. With the second win, Irfan Pathan-led Bhilwara team has reached the second position in the points table with five points, while Gujarat’s team has slipped to the third place.

Both their openers had prepared the basis for the victory of the Kings. Openers Morne Van Wyk (50) and William Porterfield (64) put on 117 runs in 58 balls for the first wicket in an explosive manner. Thanks to these two fifties, Bhilwara Kings managed to make a huge total of 222 runs for four wickets in 20 overs. In response, despite the return of Chris Gayle (15), the Gujarat team was all out for 165 runs in 19.4 overs.

Gujarat’s Yashpal Singh’s efforts insufficient
Yashpal Singh (57 runs), who stood till the last moment for Gujarat, batted well and took the news of the Kings bowlers, but his effort proved insufficient to win Gujarat, as no other batsman from Gujarat could support him. had got. This is Gujarat’s second defeat in the league.

Also read… In the eyes of Australian legend Mark Waugh, five T20I players will make a splash in the World Cup, Bumrah at the top of the list

Earlier, after losing the toss, batting first, Bhilwara Kings made a great start. Morne van Wyk (50) and William Porterfield (64) put on 117 runs in 58 balls for the first wicket. The first wicket fell on 117 in the form of Porterfield. He faced 33 balls and hit 10 fours and two sixes. After two runs, Vick was also out. Vick hit four sixes in an innings of 28 balls, while he was also successful in hitting the same number of fours.

Kings captain Pathan also showed his strength
After this, captain Irfan Pathan (34) along with Jaisal Karia (43) took the score beyond 150. Irfan became the victim of Ashok Dinda on a total of 174. Irfan hit one four and three sixes in his innings of 23 balls. After his dismissal, elder brother Yusuf Pathan (14 not out) and Karia took the innings forward. Both were successful in taking the score beyond 200. Karia faced 29 balls and hit 5 fours and 1 six, while Yusuf hit two sixes in his unbeaten stormy innings of 5 balls. Rajesh Bishnoi also hit two sixes in two balls. Dinda, KP Appanna, Thisara Perera and Green Swan took one wicket each for Gujarat Giants.

Also read… T20 series with Africa from tomorrow, Temba Bavuma told, what is the biggest challenge against India?

Gujarat did not start well
Chasing a big score, the Gujarat team did not have a good start. He lost the wicket of Kevin O’Brien (2) on the sum total of three runs. After this, Gayle and captain Virender Sehwag (27) shared a 43-run partnership for the second wicket, but Karia broke the partnership by running Sehwag for a total of 47. Sehwag hit three fours and a six in 20 balls. The team was yet to recover from the shock of Sehwag’s dismissal that S. Sreesanth gave two quick blows, first out Lendl Simmons, then giving a double blow to Elton Chigumbura (2).

Gayle was seen struggling for runs
Gayle, playing his first match in the league, was struggling for runs for a long time. Taking advantage of this, Karia confirmed the defeat of Gujarat by dismissing him for a total of 54. Gayle hit two fours in 20 balls. Gujarat lost the last wicket in the form of Joginder Sharma (10) to ensure Gujarat’s defeat, but in the final moments Yashpal Singh (57 runs, 29 balls, 6 fours, 3 sixes) and Rayad Emrit (19 runs, 3 sixes) and Rayad Imrit (19 14 balls, 2 sixes) entertained the audience with some good shots. For Bhilwar Kings, Sreesanth took three wickets while Jessel Caricha and Fidel Edwards got two successes each.