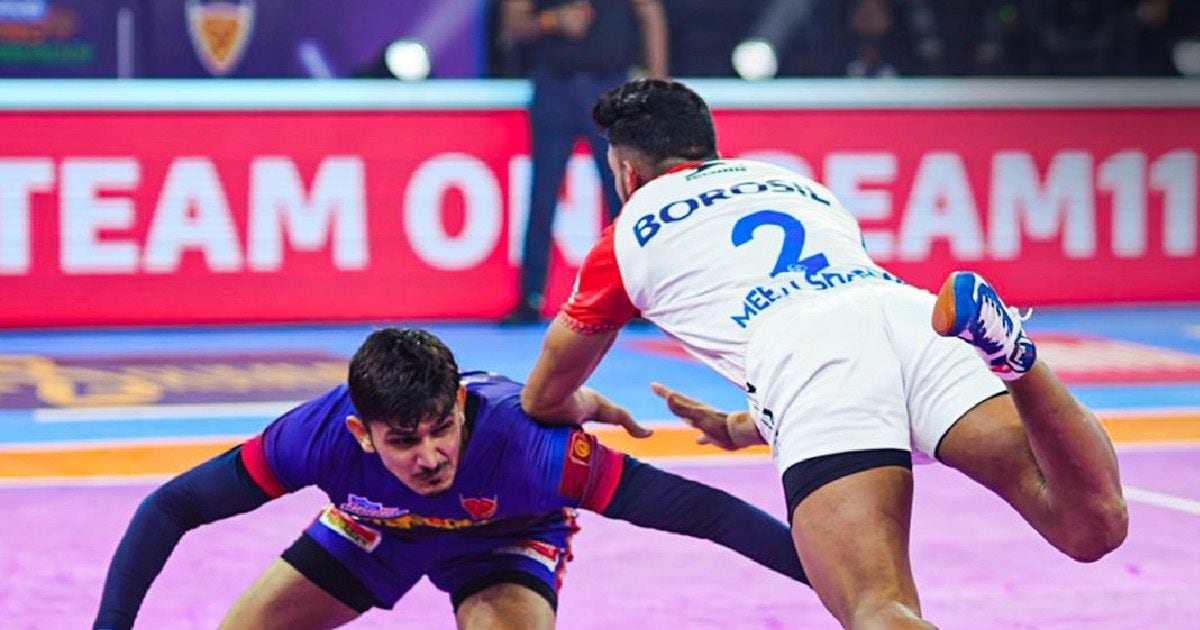 This is Delhi’s fifth consecutive win of this season. the competition was tough

In the second match, Thalaivas defeated Patna Pirates to get their first win of the season.

New Delhi. In the 25th match of Pro Kabaddi League, Dabang Delhi defeated Haryana Steelers by a margin of 38-36 in a thrilling match. This is Delhi’s fifth consecutive win of this season. However, this competition was very tough. Delhi won the match by defeating Haryana in the last raid. At the same time, Haryana has got the second consecutive defeat in the season. Delhi captain Naveen Kumar made the fifth Super 10 in the season. With this, the Delhi team has further strengthened its position in the points table and remains on top. In the second match of the day, Tamil Thalaivas won the first win of the season by defeating Patna Pirates in a thrilling match.

The match between Delhi and Haryana started very fast, in which both the teams scored points. Delhi captain Naveen Kumar was initially seen struggling. In the first half, Naveen could take only five raid points even after scoring 10 raids. During this, he was also out of the mat for more than five minutes. Manjeet took three raid points. Delhi’s defense was poor. Haryana Manjeet took five raid points. However, Haryana’s defense also could not do anything special. Delhi was leading 17-12 till half time.

Interesting fight was seen in the last moments
Haryana’s team was all out at the beginning of the second half. But it was a good thing for him that Delhi’s lead was only five points. Naveen was constantly struggling in the second half as well and this was the reason why Delhi was not able to take a big lead. However, Delhi was all out in the 15th minute and Haryana took the lead. But Haryana also did not give up hope, the match became very close, the winner could not be decided till the last raid, in the last raid Naveen Kumar gave Delhi victory by taking two points.

PKL 9: Puneri Paltan beats U Mumba in a thrilling match to win the first win of the season

Tamil Thalaivas get their first win of the season
Tamil Thalaivas defeated Patna Pirates 33-32 in the 24th match of Pro Kabaddi League. With this win, the Thalaivas registered their first win of the season. Despite playing 4 matches, Patna had not got a single win so far. Thalaivas got this victory from young raiders like Himanshu Singh and Narender Kandola. Both the teams played slow for the first 10 minutes. Both could score only 10 points. Thalaivas took six while Patna took four points. In the next three minutes, Patna showed emphasis and sent Thalaivas close to all out and later despite Himanshu’s effort, Thalaivas was all out and Patna went ahead 13-10.

Patna was ahead 17-15 till half time. For the Thalaivas this time too, Narendra Kandola was the best raider who got 7 raid points alone. Rohit Gulia took the maximum 6 raid points from Patna. The best thing about Rohit was that he took all the points in the form of touch. The beginning of the second half was also in the name of Patna and in the third minute itself he sent Thalaivas again close to all out. Again Himanshu saved the team. However, a few minutes later, the Thalaivas were all out for the second time and Patna took a 26-21 lead.

Despite being all out for the second time, Thalaivas kept himself in the match and Himanshu in particular got points consistently. Thalaivas got Patna all out in the 18th minute and took a crucial two-point lead. Himanshu won his team by taking 11 raid points.

Pro Kabaddi League Points Table
Dabang Delhi, who won the fifth match of this season in a row, is at the top of the points table and has become stronger after this victory. Delhi’s score difference has also become 58. 3 With the win, Jaipur Pink Panthers are in second place. Bengal Warriors have also won two, but Jaipur also got one point in the lone defeat.