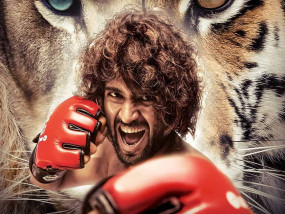 Digital Desk, Mumbai. The trailer of Vijay Deverakonda’s Bollywood debut film Liger is out, revealing why his role was called ‘crossbreed’ in the film’s poster. The trailer of the film features Ananya Panday and Ramya Krishnan in powerful roles along with Vijay. Vijay, who plays the role of a liger in the film, is said to be a crossbreed between a lion and a tiger.

The high point of the trailer is Vijay’s ripped look and vigorous action sequences, Ramya’s onscreen appearance playing the role of mother is also amazing, seeing her acting, the audience is getting the vibe of Bahubali. In this film, she will be seen showing amazing in the role of a powerful mother. Vijay plays the role of an MMA fighter in the film and in the trailer, he is seen showing off his skills during the fight scene. In the same film, Vijay can be seen struggling to speak. Ananya will be seen in the role of his girlfriend in the film.

There is also a very interesting scene in the trailer in which Mike Tyson is seen doing a cameo, he challenges Vijay to Liger. At the same time, the actor is seen representing his country in MMA fights. This thrilling film is all set to release in theaters on August 25. Now let’s see how much the audience will like Vijay’s Bollywood debut film Liger.

Share
Facebook
Twitter
WhatsApp
Linkedin
Email
Telegram
Previous articleThis TV’s Parvati showed glamorous style wearing a tight dress, fans were intoxicated after seeing the sizzling look
Next articleMichael Bracewell: Debut at the age of 31, hat-trick in the very first over, New Zealand got a stormy player before the World Cup