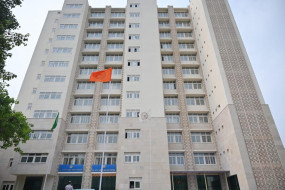 Digital Desk, New Delhi. Delhi Technological University (DTU), one of the best technical universities in the country, increased the number of seats from 6,000 to 15,000. DTU is also supporting the Delhi government through several ambitious projects along with its various research in the field of science. In the last 7 years in DTU, this has increased in a sequential manner in the seats. Two new 12-storey hostels equipped with world-class facilities have been set up at Delhi Technological University (DTU). The newly constructed Dr. APJ Abdul Kalam Boys Hostel and Veerangana Lakshmibai Girls Hostel will enable 1,000 students to take advantage of the state-of-the-art facilities here.

The 12 storey Dr. APJ Abdul Kalam Boys Hostel has 107 rooms which can accommodate 321 students. On the other hand, Veerangana Laxmibai Girls Hostel has a total of 227 rooms in which 681 students can stay. Apart from this, many other hostels are already present here, whose total capacity is about 1600. With these two hostels, DTU can now accommodate more than 2600 students in its hostels. Along with this, in the coming days, 2 new academic blocks will also be ready.

DTU is doing splendid work in the field of science and technology, due to which it has moved up in various national and international rankings. The university has been ranked 8th in a private ranking. In NIRF ranking, the university, which was ranked 63rd in 2015, has now reached 35th rank in 2022. Deputy Chief Minister Manish Sisodia said on the opening of new hostels of DTU on Wednesday that since coming to the government, our aim is to provide world-class education and facilities to the dream students while improving our higher education institutions. Sisodia said that our university is fulfilling the admission requirement. In DTU alone, the number of seats increased from 6,000 to 15,000 in the last 7 years.

He said that another major task of the university is to prepare problem solvers. Today a very big problem in front of the country is that 12 crore people are unemployed here and there are 27 crore people who earn less than Rs 35-40 per day. Our universities need to prepare such students who can solve this problem. He further said that today the per capita income of Japan-Germany countries which were completely devastated in the world war is 25-30 times more than the per capita income of India. It simply means that there is some shortcoming somewhere and which can be removed by searching through the school system and university system. For this it is important for our universities to know what role world class universities around the world have played in the history of that country in changing its present.