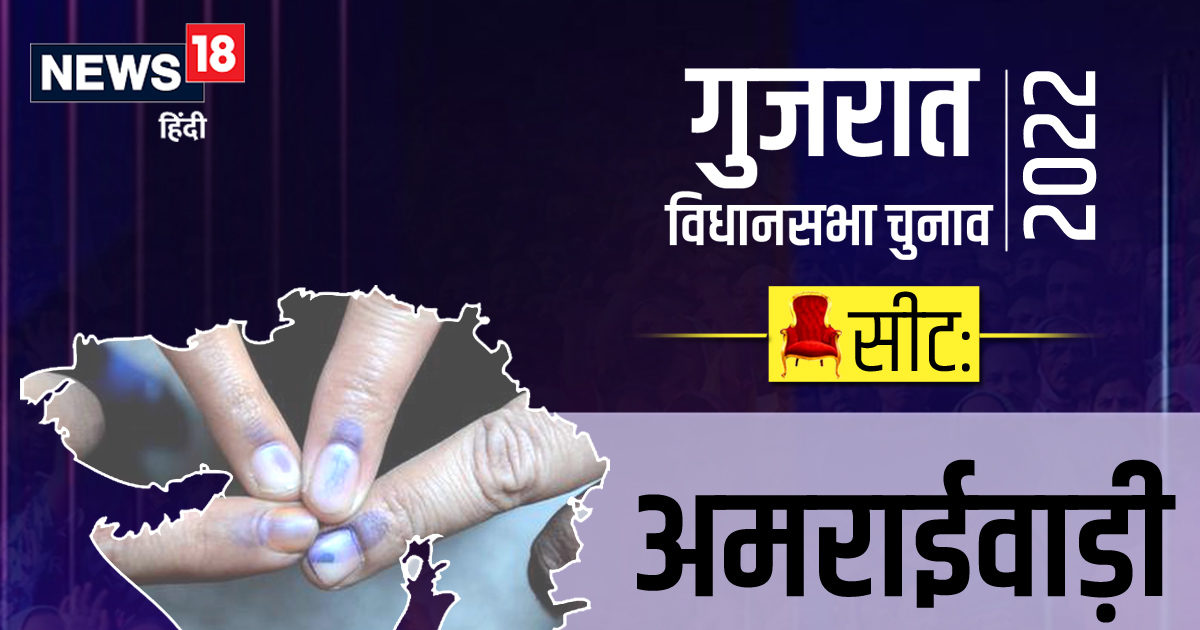 Amraiwadi assembly is seen as a stronghold of BJP

In the by-elections of 2019 also, BJP had hoisted the flag of victory.

This time there will be a triangular contest on the seat, AAP also entered the fray

Amraiwadi. The bugle of Gujarat assembly elections has sounded. All the political parties have thrown full force in the election campaign. In such a situation, the ruling conservative party is keeping a special focus on those seats which are being won for a long time. in this Amraiwadi Assembly There is also a seat (Amraiwadi Assembly Seat) which is seen as a stronghold of the BJP. The BJP had won this seat for the second time in 2017, but in 2019 its supremacy was maintained even in the by-elections held on this seat.

BJP’s Patel Hasmukhbhai Somabhai H.S. Patel) won by defeating INC’s Chauhan Arvind Singh Vishwanath Singh (Arvind Chauhan) by a margin of 49,732 votes. But after being elected Lok Sabha MP from Ahmedabad East, by-elections were held on this seat in 2019.

In the by-election of this seat, Jagdish Ishwarbhai Patel (BJP Jagdish Ishwarbhai Patel) retained the supremacy by defeating Dharmendra Shantilal Patel of Congress by 5,528 votes. On this seat, BJP has fielded Dr. Hasmukhbhai Patel, Congress Shantilal Patel and Aam Aadmi Party has fielded Bharatbhai Patel (AAP Bharatbhai Patel) in the election season. This time the election contest is expected to be triangular.

BJP’s Patel Hasmukhbhai Somabhai H.S. Patel) got a total of 105,694 votes while Congress’s Chauhan Arvind Singh Vishwanath Singh (Arvind Chauhan) got 55,962 votes in second place. The margin of victory and defeat between the two was recorded at 49,732 votes. Importantly, BJP’s Hasmukhbhai had won the seat in 2012 as well with a huge margin of 65,425 votes.

The number of voters in Amraiwadi seat is more than 2.96 lakhs.

The BJP has held the Ahmedabad West Lok Sabha seat for 15 years.

Amraiwadi Assembly Seat is a special seat under Ahmedabad District and Ahmedabad West Parliamentary Constituency (SC Reserved). Dr. Kirit Premjibhai Solanki of BJP won this parliamentary seat by defeating Raju Parmar of INC by a margin of 3,21,546 votes. BJP’s Dr. Solanki got a total of 6,41,622 votes i.e. 64% votes. While Raju Parmar of Congress got only 3,20,076 votes i.e. 32% votes.

Gujarat state elections will be held in two phases on all 182 seats.

Let us inform that out of total 182 assembly seats in Gujarat, elections will be held on 89 seats in the first phase on December 1. At the same time, votes will be cast on the remaining 93 assembly seats on December 5. Election results will be announced on 8th December. The important thing is that this time apart from BJP and Congress, Aam Aadmi Party (AAP) is also fighting strongly in the electoral fray.