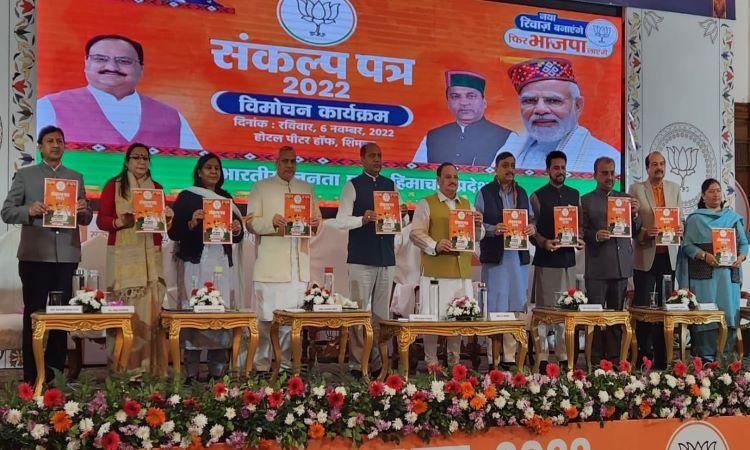 New Delhi: Less than a week before the Himachal Pradesh elections, the ruling BJP on Sunday announced that if the party is re-elected, it would implement a Uniform Civil Code, which would do away with the religion-specific law.

Since a civil code is usually considered to be within the domain of a federal government rather than a state, the opposition has criticized the plan, which was also promised in Gujarat, which was due to go to polls next month, only to increase votes. As a gimmick for. Hindu majority.

The BJP in Himachal Pradesh has resolved to conduct a “survey” of waqf holdings, which are Islamic properties provided for charitable or religious purposes, to look for any illegal activity. The action, implemented in BJP-ruled Uttar Pradesh in September, drew criticism for its intention to polarize.

The BJP’s manifesto calls for creating 8 lakh “employment prospects” in five years, reducing the Goods and Services Tax (GST) on packaging from 18% to 12% for the state’s important apple crop, and providing 33% government jobs. Includes promise. women.

It was announced by BJP president JP Nadda, who hails from the Himalayan state, and included promises of five new medical schools, scooters for college girls, and cycles for female students from classes 6 to 12.

In keeping with the pledge made in Gujarat, Nadda said the state would form a committee to develop a uniform civil code.

Additionally, he criticized the Congress manifesto released on Saturday, saying it lacked both vision and weight.

Along with Gujarat, which will go to polls in two phases on December 1 and 5, the 68-member Himachal Pradesh Assembly elections will be held on November 12, with results expected on December 8.

As Arvind Kejriwal’s Aam Aadmi Party attempts to enter the state, the BJP, which has always alternated with the Congress in Himachal Pradesh elections, hopes to break this pattern.