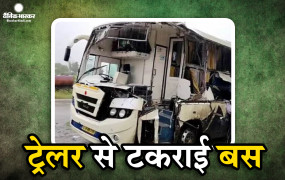 This horrific road accident took place on National Highway 130 at Pondi Uporda in Korba district. The metro bus CG 04 MM 3195, which was running at high speed, collided with the trailer parked in the mud. Men, women and children were among the dead that were blown off one side of the bus in the collision.

The police patrolling on the National Highway reached the spot and informed the Bango police station, as soon as the information was received, the Bango police immediately reached the spot and took the injured to Korba district hospital. Giving information to the media, Korba SP said that the incident took place at four in the morning, the injured have been admitted to the hospital. where he is being treated. More information is awaited.

Seven people were killed and three were injured when a bus rammed into a parked trailer vehicle near Madai Ghat in Korba district. The incident happened around 4 in the morning. The injured have been admitted to the hospital: SP Korba Santosh Singh, Chhattisgarh pic.twitter.com/m26wGIm95z