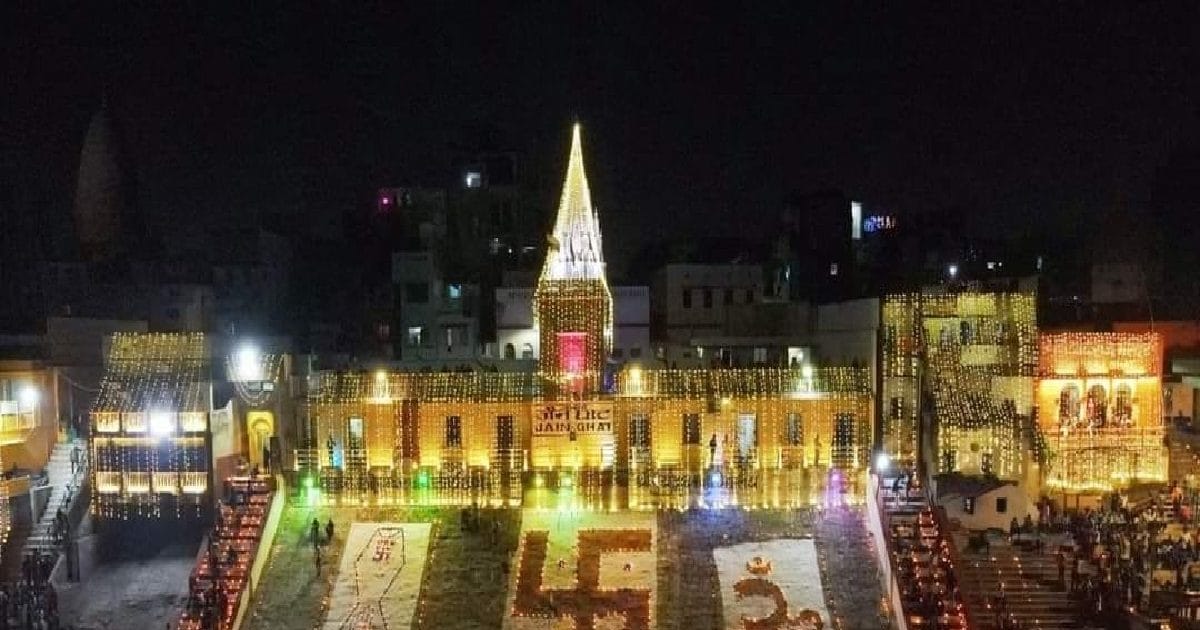 On the occasion of Dev Deepawali, 10 lakh lamps were lit at 84 ghats of Kashi.

With public participation, people lit about 11 lakh lamps in the city.

A laser show has been organized at Chet Singh Ghat, which was very much liked by the tourists.

Varanasi. On Monday, on Kartik Purnima, Dev Deepawali was organized in Kashi, the city of Mahadev, with full joy and gaiety and 10 lakh lamps were lit at 84 ghats on the banks of the Ganges. With public participation, people lit about 11 lakh lamps in the city. Administrative officials gave this information. The crescent-shaped form of Mother Ganga was lit up with the light of millions of lamps. According to the district administration, 10 lakh diyas were lit by the Yogi Adityanath-led government of the state at 84 ghats on the banks of the Ganges, while about 11 lakh diyas were lit with public participation.

Describing the importance of Dev Deepawali, Mahant Jitendra Mohan Puri of Batuk Bhairav ​​temple told that Lord Shiva killed the demon Tripurasura on the full moon day of Kartik month. In the joy of killing Tripurasura, the deities celebrated Diwali by lighting diyas in Kashi and that is why Dev Deepawali is celebrated every year in Kashi on the full moon of Kartik month. A senior district administration official said that on the occasion of Dev Deepawali, around eight lakh diyas have been lit at 84 ghats on the western bank of the Ganges. Along with this, the east coast has also been illuminated with about two lakh diyas.

At the same time, the residents of the city have decorated the entire city with about 11 lakh diyas. The city’s temples, ponds and other places have been lit by the residents of the city. The official said that a laser show has been organized at Chet Singh Ghat, which was very much liked by the tourists. Officials said that the Dev Deepawali committees offered lamps to the great sons of Kashi at various ghats of Kashi. Tributes were paid by putting pictures of personalities like Mahamana Madan Mohan Malviya at Assi Ghat, Tulsidas at Tulsi Ghat, Dom Raja at Harishchandra Ghat, Tailang Swami at Scindia Ghat.

Dev Deepawali was dedicated to the martyred immortal soldiers by preparing a replica of Amar Shaheed Jyoti at Dashashwamedh Ghat on behalf of Ganga Seva Nidhi. Varanasi District Magistrate S Rajalingam said that government buildings, all squares and pillars have been LED lighting including tricolor. Apart from this, passengers landing at the airport, railway station, bus station were welcomed. Officials of the district administration said that large LED screens have been arranged at six prominent places for a live display of the aarti and decorations of the world famous Kashi Ghat on Dev Deepawali.