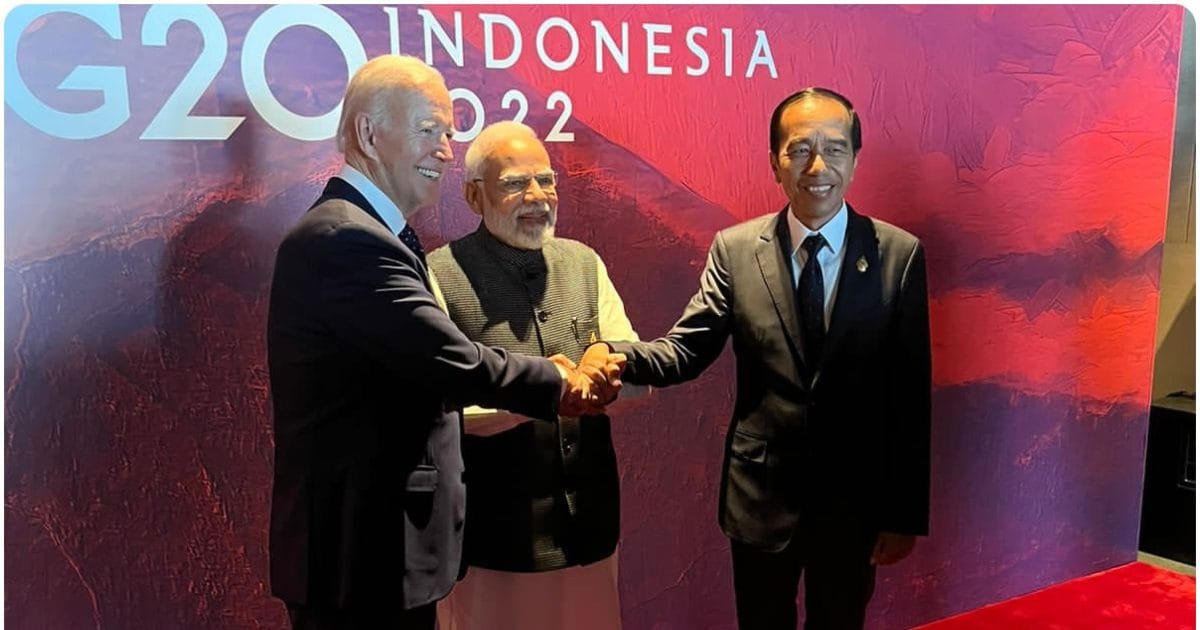 Bali, Indonesia). Prime Minister Narendra Modi and US President Joe Biden discussed the strategic partnership between India and the US during the G20 summit. During this, issues like emerging technology, artificial intelligence were also discussed between the two leaders. Both the leaders expressed satisfaction over the cooperation between the two countries in groupings like QUAD, I2U2 and discussed global and regional developments.

Modi and Biden are also understood to have discussed the Russia-Ukraine war and its implications during their meeting on the sidelines of the G20 summit in the Indonesian city of Bali. The MEA statement, however, only said that the two leaders discussed current global and regional developments during their meeting. According to the statement, “Prime Minister Narendra Modi and US President Joseph R. Met Biden on Tuesday on the sidelines of the G20 leaders’ summit in Bali.

Said thanks to Biden for cooperation
The MEA statement said, “The two leaders reviewed the India-US strategic partnership, including deepening cooperation in future-oriented areas such as emerging technologies, advanced computing, artificial intelligence, etc.” The Ministry of External Affairs said that Prime Minister Modi thanked President Biden for his continued cooperation in strengthening the India-US strategic partnership. “They expressed confidence that the two countries will continue close coordination during India’s G20 chairmanship,” the statement said.

A White House statement said Biden met Modi and Indonesian President Joko Widodo on the sidelines of the G20 summit, which aimed to convey their shared commitment to the G20 as the top forum for international economic cooperation. To address important global challenges, the leaders also discussed demonstrating the G20’s collective ability to bring together major economies with the aim of advancing sustainable and inclusive growth, the statement said. Also, they discussed climate, energy and food crisis and promoting technology change.

Satisfaction on cooperation in ‘Quad’ and ‘I2U2’
According to the Ministry of External Affairs, both the leaders expressed satisfaction at the close cooperation between India and the US in new groupings like ‘Quad’ and ‘I2U2’. It is known that the member countries of the Quad group are India, America, Australia and Japan, while the I2U2 group includes America, United Arab Emirates and Israel.

Meanwhile, Foreign Ministry spokesperson Arindam Bagchi described the Modi-Biden meeting as ‘useful’. Bagchi said in a tweet, ‘There was a useful discussion between Prime Minister Narendra Modi and US President Joe Biden on the sidelines of the G20 summit. Both leaders appreciated the deepening of India-US strategic partnership and continued close cooperation in groupings such as Quad, I2U2. Both agreed to maintain close cooperation during the G20.

This conversation between Modi and Biden took place at a time when Foreign Minister S Jaishankar met his American counterpart Antony Blinken on the sidelines of the ASEAN summit in Nam Penh, the capital of Cambodia. The two leaders discussed bilateral issues, Russia-Ukraine war, energy, G-20 and the situation in the Indo-Pacific region. Since the start of the Ukraine crisis in February, Modi has had several telephonic conversations with both Russian President Vladimir Putin and Ukrainian President Volodymyr Zelensky.

In a phone conversation with Zelensky on October 4, Modi had said that there could be “no military solution” to the Ukraine crisis and that India was ready to contribute to any peace efforts. In a meeting with Putin on September 16 in Uzbekistan’s Samarkand city, Modi urged the Russian president to end the war in Ukraine, saying that ‘today is not the era of war.’ (with language input)