Himachal elections: ‘Congress is coming in Jairam ji’s swearing-in’, this poster of Shimla in discussion 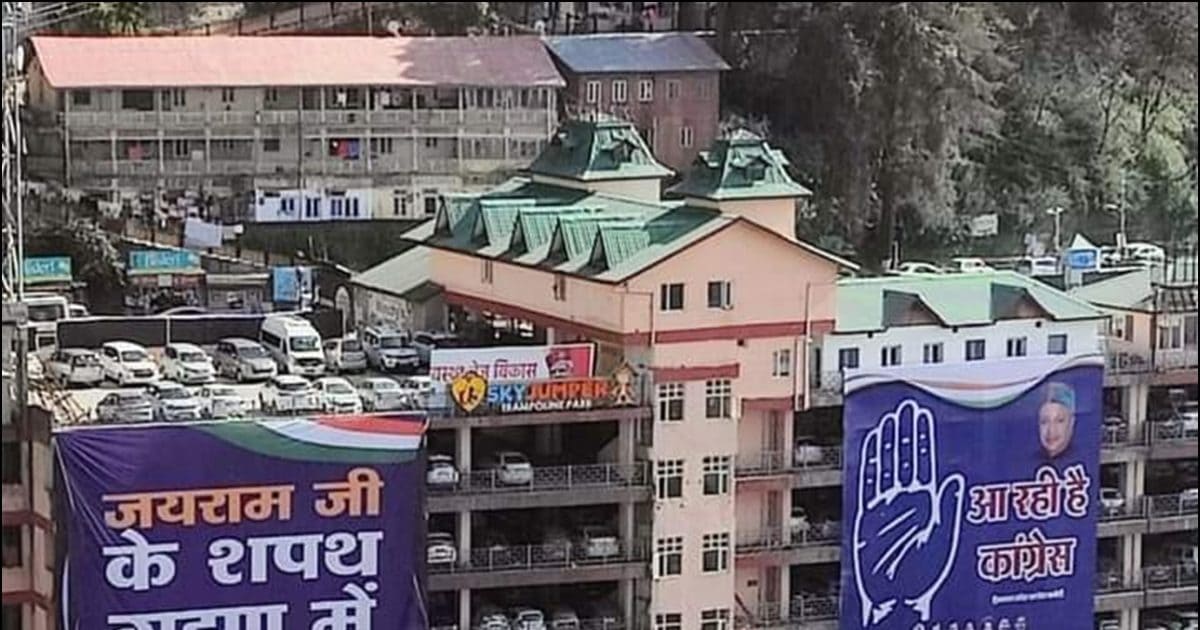 Himachal BJP put up a poster of ‘Jai Ram ji’s swearing in’ along with the poster of Congress’ ‘Aa Rahi Hai Congress’.

On reading this poster from a distance, it looks like ‘Congress is coming in Jairam ji’s swearing-in’.

Shimla: As the date of Himachal Pradesh assembly election is approaching. By the way, the attacks on each other among the political parties are also seen intensifying. So far, the political war going on with the help of war of words has turned into a poster war. One such interesting poster was seen on Cart Road in the capital Shimla. Where along with the poster of Himachal Congress, BJP put up such a poster, which is being discussed not only in the city but in the entire state.

Himachal BJP put up a poster of ‘Jai Ram ji’s swearing in’ along with the poster of Congress’ ‘Aa Rahi Hai Congress’. After this, after reading this poster from a distance, it looks like ‘Congress is coming in Jairam ji’s swearing-in’. People coming and going are also giving different reactions after seeing the poster. On social media too, the comment war between both the political parties regarding this poster is in full swing. It will be interesting to see how much influence both the political parties will be able to make among the public through the poster war.

Poster has now been removed

The poster put up on the parking building in front of Congress office from Old Bus Stand in Shimla has now been removed. Now the poster of PM Modi has been put here. People reacted on social media regarding the poster. It is worth mentioning that in Himachal, votes will be cast for the assembly elections on November 12. Along with this, the election results will be declared in the state on 8th December. More than 55 lakh voters will vote in Himachal. Half of the population in this is women.

Share
Facebook
Twitter
WhatsApp
Linkedin
Email
Telegram
Previous articlePhone Bhoot Box Office Collection Day 2: The magic of Katrina’s film did not work even on the second day, did just that much collection
Next articleProtect baby’s skin from chemicals, make moisturizer at home with these 4 ways