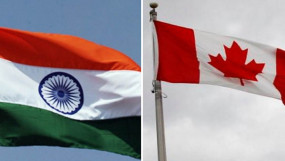 The government has also said that the Ministry of External Affairs has spoken to the Canadian authorities regarding the cases of anti-India activities and hate crime in Canada. During the talks, the Canadian authorities have been asked to investigate these matters and take appropriate action. India said that no punishment has yet been given to those responsible for these crimes in Canada.

India said yesterday that it finds it highly objectionable that politically motivated exercises by extremist elements are allowed in a friendly country on the ongoing separatist activities against India in Canada. On Thursday, Foreign Ministry spokesman Arindam Bagchi said the so-called Khalistan referendum in Canada is a ridiculous exercise organized by radicals and extremists.

A Foreign Ministry spokesperson told reporters that India has taken up the matter with the Canadian administration through diplomatic channels and will continue to take up the issue with Canada in the future.

Let us tell you that a few days ago, an Indian student was injured in a shooting in the Canadian city of Ontario, later he died. Two other people including a policeman also lost their lives in this incident.

Share
Facebook
Twitter
WhatsApp
Linkedin
Email
Telegram
Previous articleAre you eating apples fiercely this season? First know the disadvantages of this
Next articleFor the first time in the country, the bullet train will run in such a long tunnel under the sea, you will also be shocked to hear the depth

The petition filed to ban religious processions was rejected, the Supreme Court said a big thing