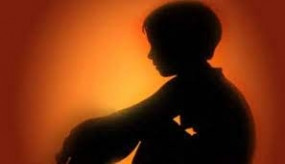 Digital Desk, Bhopal. In a shocking incident in Madhya Pradesh’s Sagar district, an 11-year-old boy was thrashed by a priest of a Jain temple by tying him to a tree.

Police swung into action after a video of a boy crying for mercy surfaced on social media on Saturday. Shockingly, the boy was punished for allegedly stealing almonds kept for worship in the temple. The boy’s greed enraged the priest who decided to teach him a lesson.

In the viral video, the boy can be seen crying incessantly and seeking mercy from the priest, who tied him to a tree in the temple premises.

When a man asked the priest to free the child, he was told, You just take care of your work. According to the police, the accused priest has been identified as Rakesh Jain, a resident of Sagar district.

Later, the boy’s father lodged a complaint with the local police station. According to the complaint, the priest and another person tied the child to a tree and beat him up. A police officer said, a case has been registered against the accused Pujari under the SC and ST (Prevention of Atrocities) Act.