Opened 4 days ago, 8 crores was spent on repair… these 5 questions arising when the 143 year old Morbi bridge broke down 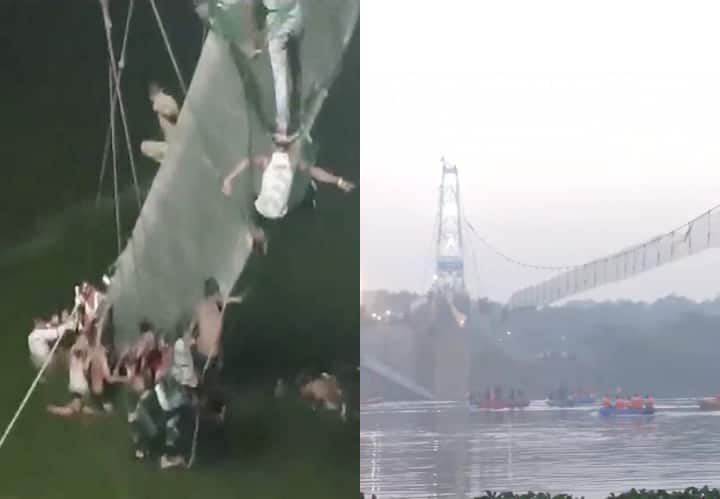 How Morbi Cable Bridge Collapsed: The 143-year-old cable bridge built on the Machu river in Gujarat’s Morbi broke at around 6 pm on Sunday (October 30). According to the information received by ABP News, 141 people have lost their lives in this painful accident. Gujarat Home Minister Harsh Sanghvi has said that 132 people have died. 6-6 lakh compensation has been announced to the victims’ families.

According to the Gujarat Information Department, 177 people have been rescued so far. 19 people are undergoing treatment. Teams of Army, Navy, Air Force, NDRF and Fire Brigade are conducting search operations on the spot. The Marine Task Force of Gujarat Police conducted a rescue operation in the Machu river overnight. After the repair of the bridge, it was opened only four days ago. Eight crore rupees were spent in the repair work of the bridge. After the accident, many questions are arising.

These five questions are being raised regarding the Morbi bridge accident

All three armies engaged in relief

Morbi bridge accident has shaken the whole country. Relief work is going on after the accident. In this work, the three armies have taken the front. NDRF and SDRF teams are already engaged in relief work. Gujarat Chief Minister Bhupendra Patel is closely monitoring every activity. CM Patel also met the injured admitted in Morbi Civil Hospital and inquired about their well being.

Home Minister Harsh Sanghvi reached the spot in the early hours of Monday (October 31) to take stock. Harsh Sanghvi said, “Navy, NDRF, Air Force and Army arrived immediately. More than 200 people did relief work overnight. A criminal case has been registered. The investigation has started under the leadership of IGP. So far 132 people have died. The CM has constituted a high power committee only yesterday. All the officers posted at different places were asked to report in Morbi by 2 o’clock in the night. Is.