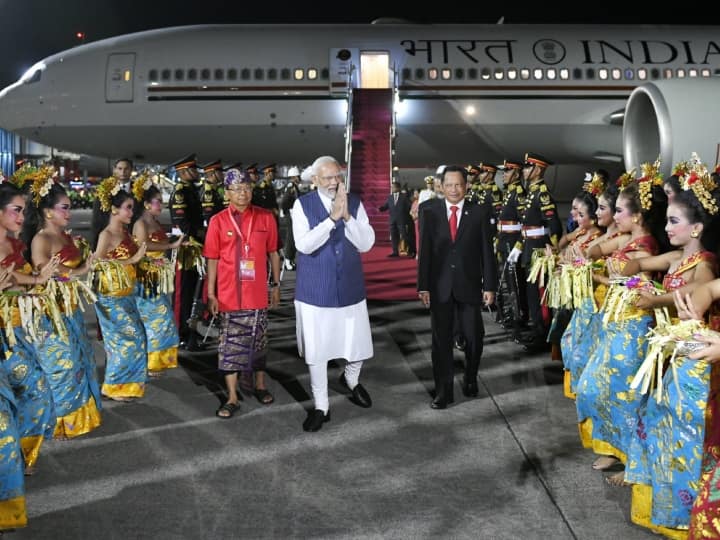 G-20 Summit in Bali: Prime Minister Narendra Modi has reached Bali, Indonesia on Monday (November 14) to participate in the G-20 Summit. He said that he will have a comprehensive discussion with the leaders of the G20 group here on reviving global economic growth, challenges like ensuring food and energy security, and solutions to issues related to health and digital transformation.

PM Narendra Modi said in a statement on his departure for Bali to attend the G20 summit that he would also highlight India’s achievements and its “strong commitment” to collectively address global challenges. Also, discussions are expected on pressing global challenges including the Ukraine crisis, especially its implications on food and energy security. Let us inform that Chinese President Xi Jinping, US President Joe Biden, British Prime Minister Rishi Sunak and French President Emmanuel Macron are also going to attend the G-20 summit.

What did PM Modi say?

PM Narendra Modi said, that during the Bali Summit, I will hold extensive discussions with the leaders of the G20 countries on major issues of global concern such as global economic growth, food and energy security, environment, health and digital transformation. He further told that during the talks at the summit, I will underline India’s achievements and its strong commitment in collectively solving global challenges.

G20 is an influential organization of global economic cooperation. It represents about 85 percent of global gross domestic product (GDP), more than 75 percent of global trade, and about two-thirds of the world’s population. Indonesia is the current chair of the G20. India will formally take over the presidency of the G-20 from December 1.

‘It will be a momentous moment for citizens’

PM Modi said, “India will formally take over the presidency of the G20 from December 1, 2022.” I will personally invite leaders of all member states to attend the summit next year.” He further said that India’s G20 presidency will be based on the theme of ‘Vasudhaiva Kutumbakam’ or ‘One Earth, One Family, One Future’. Which emphasizes on the message of equal development and future for all. Also said that he looks forward to addressing members of the Indian community in Bali at a reception on Tuesday.

this is the plan

PM Narendra Modi said that on the sidelines of the G20 summit, he will meet leaders of several member countries of the grouping and review the progress of India’s bilateral relations with them. The G-20 group is an intergovernmental forum of major developed and developing economies of the world.

Also read- G-20 Summit: What is G-20 summit, for which PM Modi will go to Indonesia, why is it special for India?