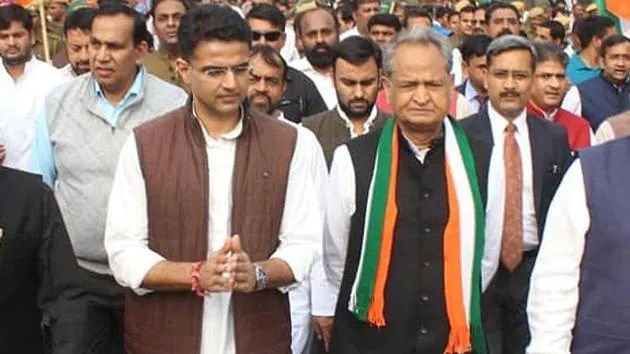 New Delhi: Shanti Dhariwal, Mahesh Joshi and MLA Dharmendra Rathore were served a show cause notice by the Congress Disciplinary Committee for holding a parallel meeting of MLAs last weekend instead of attending the Congress Legislature Party meeting, which was attended by three important supporters was. Rajasthan Chief Minister Ashok Gehlot.

After a few hours in Delhi, former Madhya Pradesh chief minister and top Congress official Kamal Nath left for Bhopal and refrained from mediating disputes between rival factions of the Rajasthan Congress. To help resolve the leadership issue, Congress veteran AK Antony, who had earlier announced his retirement from active politics, was asked to return to Delhi. Party treasurer Pawan Bansal collected two sets of nomination papers “for someone else”.

And Ashok Gehlot informed close friends that he was ready to resign as chief minister of Rajasthan, but he would not “let a traitor become CM”, making it clear that he would tolerate anyone else in that role, But Sachin Pilot, who encouraged Congress MLAs to join BJP in 2020.

Congress President Sonia Gandhi had sent senior leaders Ambika Soni and Anand Sharma to talk to Gehlot. A former member of the Congress Working Committee (CWC) warned that the election process may get delayed if the issues are not resolved tonight (Tuesday night). The last date for submission of nominations of applicants is 30 September.

The pilot’s arrival in Delhi, though it was unclear whether he had been invited or traveled to the city independently, only served to further the confusion. Till going to press, he was not given the opportunity to meet the Congress President.

Shashi Tharoor, a former federal minister and member of the Kerala legislature, is currently the only definitive candidate for the post of president in the Congress. He is expected to file his nomination on Friday with the support of 30 other party members.

Share
Facebook
Twitter
WhatsApp
Linkedin
Email
Telegram
Previous articleOn being called dark, the angry wife cut her husband with an ax, spent the night with the dead body and then…
Next articleBumper vacancy for the posts of Office Attendant for 10th pass in Bihar

COVID-19: New variant of corona infection spreading rapidly in China, how big is the danger for India

Mudra Yojana: Will the government give a loan of Rs 10 lakh on giving Rs 4500 in this scheme? know the whole truth