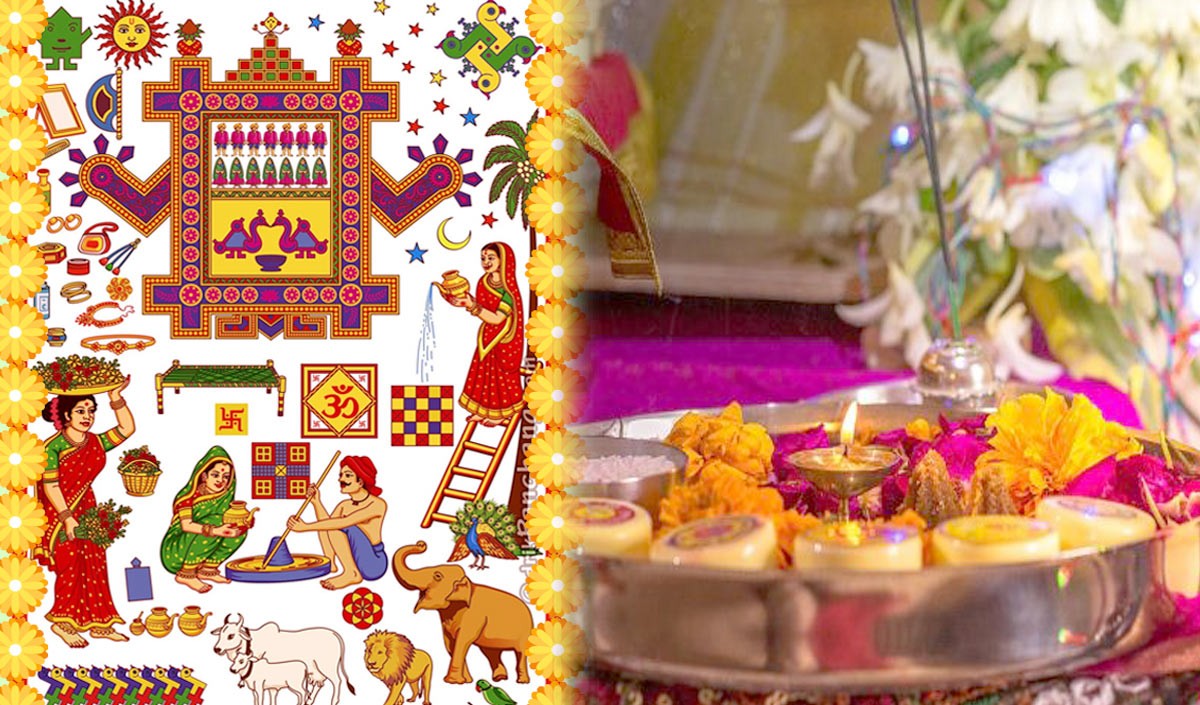 Five years passed after the marriage of a woman named Chapma, but she did not have any children. One day an old lady advised him to keep the fast of Ahoi. Champa’s neighbor Chameli also started fasting for Champa’s Dekh Dekh Ahoi to get a child.

Ahoi Mata’s fast is observed on the Ashtami of Krishna Paksha of Kartik month. Mothers keep a fast on this day abstaining themselves from even water. This year this festival will be celebrated on 17th October. The auspicious time of worship on Ahoi Ashtami will be from 5.50 pm to 7.05 pm in the evening. The day of Ahoi Ashtami is also known as Ahoi Eighteen. Ahoi Ashtami fast falls four days after Karva Chauth and eight days before Diwali Puja. An eight-cornered effigy is made on the wall in the evening on the Ahoi Ashtami festival, which is considered a very famous festival in North India. Siyu Mata and her children are made near the effigy. On this day, raw food is eaten by offering Arghya to the Moon and Arghya is offered to the stars through Karva. On this day, daughter-in-law women observe this fast for the long life and happiness of their son.

Keep the picture of Ahoi Mata at the place of worship or worship her by making her figure on the wall. Clean the place of worship and establish a Kalash there. On this day, fasting women wake up in the morning and take a bath and after reciting puja, take a resolution that I am fasting for Ahoi Mata for the long life and happy life of my son. Oh mother, keep my sons long, healthy and happy. There is also another ritual in Ahoi worship that silver Ahoi is made which is called Syahu. This ink is worshiped with Roli, Akshat, milk and rice. Whatever method you do worship, but keep water in an urn for worship. After worship, touch mother-in-law’s feet and get her blessings. After the worship, milk and rice are offered to Ahoi Mata. After worship, listen and narrate the story of Ahoi Mata.

Also read: Ahoi Ashtami fast is kept for the happiness and prosperity of children and long life

Five years passed after the marriage of a woman named Chapma, but she did not have any children. One day an old lady advised him to keep the fast of Ahoi. Champa’s neighbor Chameli also started fasting for Champa’s Dekh Dekh Ahoi to get a child. While Champa fasted with reverence, Jasmine was motivated by a sense of selfishness. One day the goddess appeared and asked him what do you want, then jasmine hastily asked for a son, while Champa politely said – will you also have to tell your wish? You are omniscient. Devi said that many children are playing in a garden in the north direction. Bring whatever you like there. If I could not bring it, I would not get a child.

Both of them went to the garden and started catching the children. The children started crying and running away. His cry was not seen from Champa. She did not hold any child, but Jasmine held a crying child tightly by her hair. Praising Champa’s kindness, the goddess blessed her to have a daughter, but proved Jasmine unfit to be a mother. Champa got a son after 9 months, but Jasmine remained childless. Since then this fast is observed with devotion for the sake of the son.

Share
Facebook
Twitter
WhatsApp
Linkedin
Email
Telegram
Previous articleWill Suryakumar Yadav prove to be the new Yuvraj of Team India? Have lived up to the expectations every time
Next articleBefore the practice match, Dinesh Karthik won the hearts of people by giving batting tips to Pant, watch video

Swapna Shastra: These 7 dreams indicate auspicious events in the future