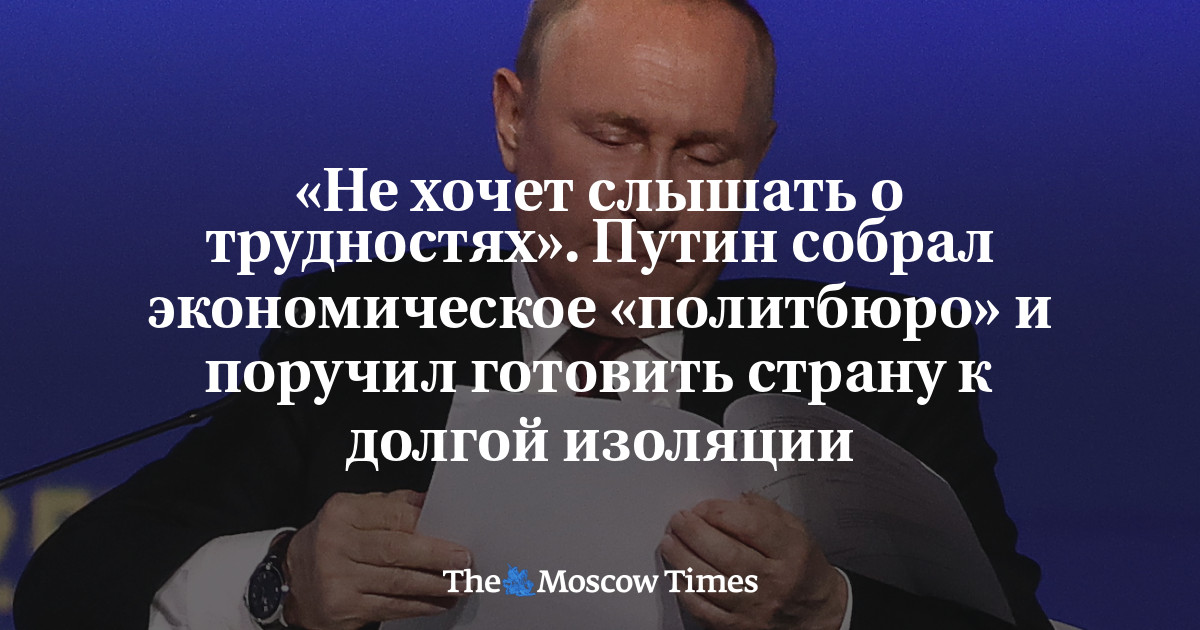 The first currency default in 100 years, the collapse of the auto industry and metallurgy, and personal sanctions against the “inner circle” of friends and billionaires were powerless to get President Vladimir Putin’s thinking off the ground.

Having gone into deep isolation himself, Putin continues to bet on the long isolation of the country, Meduza reports, citing sources close to the government, the Kremlin, and the Presidential Administration.

According to one of them, Putin assembled an “economic politburo” of five people: these are the head of the Central Bank of the Russian Federation Elvira Nabiullina, Finance Minister Anton Siluanov, presidential aide and former head of the Ministry of Economic Development Maxim Oreshkin, as well as the head of VTB Andrei Kostin and the head of Rosneft Igor Sechin .

Prime Minister Mikhail Mishustin was not included in the “close circle” of economic advisers, and, according to Meduza’s sources, he does not suffer much from this: after February 24, the government has to “work in manual mode”, trying to both protect the Russian economy from sanctions and not incur bear the wrath of the president.

Neither Mishustin nor the members of the economic “politburo” knew about the upcoming war. According to Meduza’s sources, the Kremlin only conveyed to the ministers the information that a “limited contingent of troops” would enter the territory of the self-proclaimed DPR and LPR to “maintain order on the territory.”

Putin strove for secrecy, but as a result, the economy was not ready. “No one believed that everything could go according to such a scenario. Otherwise, they would have made at least some stocks – spare parts for mining equipment, machine tools, aircraft, – a source close to the government complains. “But it didn’t.”

Now the country is left without half of its gold and foreign exchange reserves, the aircraft fleet has to be dismantled for spare parts, imports have halved and it is still difficult to find a replacement. In mid-June, the decline in supplies from abroad was 40%, said the head of the Ministry of Economic Development Maxim Reshetnikov at the RUIE congress.

A Central Bank study showed that every fourth Russian company could not find a replacement for foreign raw materials and components. The most difficult situation is in the production of medicines, where 40% of factories are looking in vain for alternative suppliers, and 10% say that there is no replacement in principle.

Entire industries collapsed in the country: the automotive industry – by 97%, the production of diesel locomotives, electric locomotives and wagons – by 40-60%; metallurgy – by 25-40%. But Putin doesn’t want to hear anything about the difficulties, says a Meduza source close to the Presidential Administration.

According to him, the president “believes that the country can live a long time away from the rest of the world, which sooner or later will come to bow to it.”

Putin demands from technological zero recreate auto industry, learn to to produce electronics, and the government plans to produce 100 aircraft a year – as in the days of the USSR.

But while the Russian economy produces one blanket for 70 people a year, one dress for 12 women and not a single iron for 145 million people, leads statistics economist Yakov Mirkin.

Turning into a closed fortress promises Russia “shocks”, thinks he: “The entire experience of world history suggests that closed economies are dying out.”