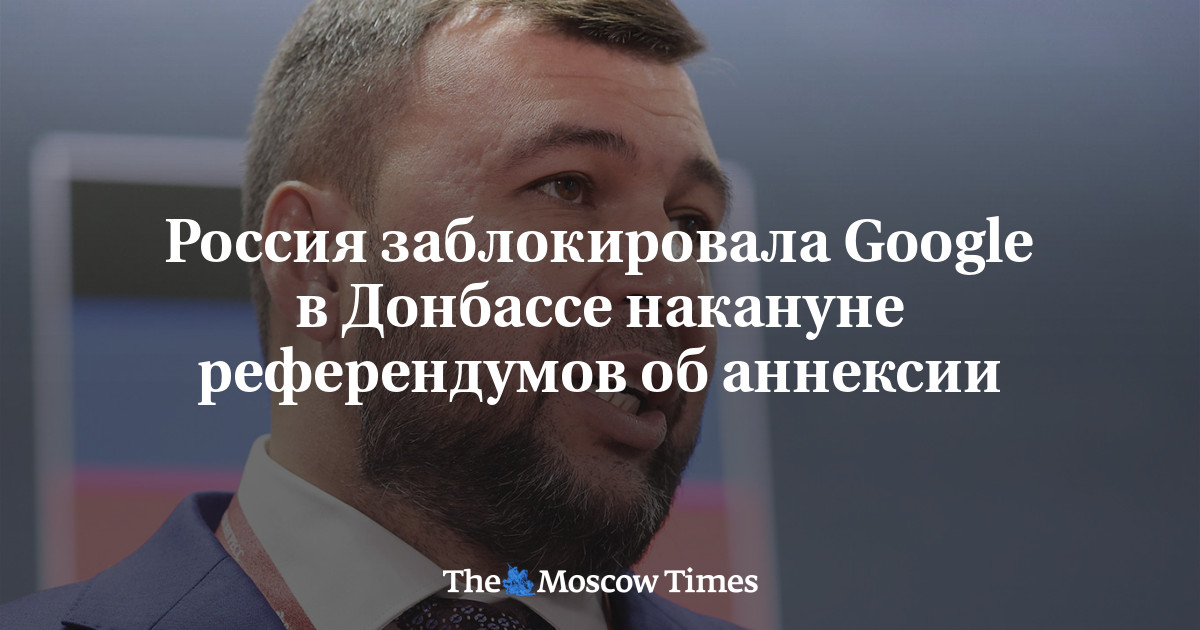 The self-proclaimed Donetsk People’s Republic blocked Google services on its territory following the Luhansk one. The head of the DPR, Denis Pushilin, spoke about this, reproaching the company for “inhuman propaganda of Ukraine and the West.”

“There is a real persecution of Russians, the imposition of lies and disinformation. At the forefront of information technology in this regard is the Google search engine, which openly, on the orders of its curators from the US government, promotes terrorism and violence against all Russians, and especially the population of Donbass, ”Pushilin believes.

According to the head of the republic, there will be no obstacles for Google’s work if the company “returns to the mainstream of law, morality and common sense.” By this time, Twitter and Facebook had already been blocked on the territory of the DPR.

Previously, Google was blocked on the territory of the self-proclaimed Lugansk People’s Republic. GLava of the LPR Leonid Pasechnik accused the search engine of a “flurry of fakes and disinformation.” He assured that the occupied territory of the Luhansk region “could cope without Google.” The head of the LPR promised to “think” about unblocking Google after the search engine “corrects” and “begins to respect people.” The authorities of the republic also blocked Facebook, Instagram and also Viber.

Foreign Internet services are cut off in the self-proclaimed republics against the backdrop of news about the upcoming referendum, the main issue of which will be joining Russia. According to Bloomberg, citing sources familiar with the Kremlin’s strategy, officials are preparing to organize a vote in areas currently controlled by the Russian military, and in any other areas that their troops can capture in the coming weeks. Rea referendum on joining Russia is planned to be held before September 15.

The project is led by Sergei Kiriyenko, First Deputy Head of the Kremlin Administration. Particular attention is paid to the Donetsk and Luhansk regions, as well as the southern territories of the Kherson and Zaporozhye regions. According to Bloomberg interlocutors, Kiriyenko regularly visits the occupied territories to observe the preparations of the authorities for the plebiscite.

Member of the HRC Igor Ashmanov, president of the research and technology company Kribrum, did not rule out that in Russia “by autumn” one of the services owned by Google, YouTube video hosting, could be blocked. This will happen when Rutube, the Russian analogue of YouTube, is fully operational. — and the video platform on VKontakte will become “more or less self-hosting,” he suggested, speaking at a July 19 roundtable at the Public Chamber.

It is with the refusal to delete videos The main claims against Google were connected with YouTube by the Russian authorities.

Russian authorities accuse Google of refusing to remove “fakes” about the war in Ukraine, but so far they have limited themselves to fines. After several trials, the court began to fine the company for a certain percentage of annual revenue: in December 2021, Google LLC was assigned a turnover fine of 7.22 billion rubles, July 18 – on 21.7 billion rubles.

In June, the Moscow Arbitration Court received a lawsuit to declare Google LLC, the Russian subsidiary of Google, bankrupt. The procedure was started by the company itself: the arrests of accounts made its work in Russia impossible.