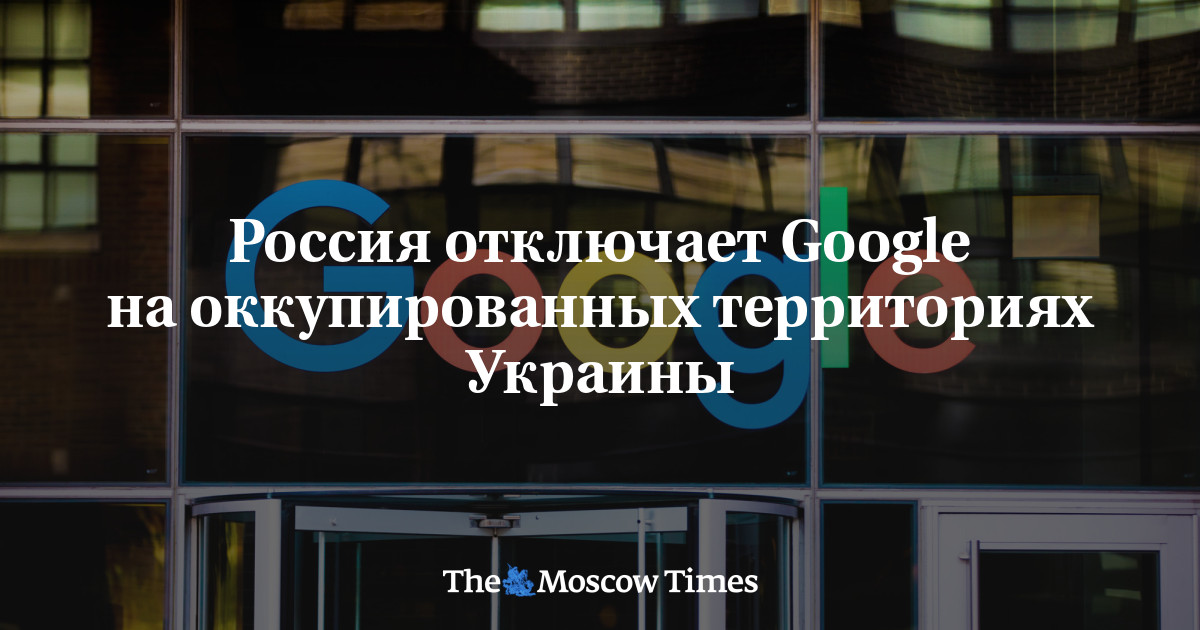 The occupying authorities of the Kherson region, following the self-proclaimed Donetsk and Lugansk people’s republics, blocked Google on their territory. The Zaporozhye authorities appointed after the Russian invasion slowed down the company’s services and threatened to block it if Google “does not come to its senses.”

Kirill Stremousov, deputy head of the pro-Russian administration of the Kherson region, called Google an element of information terrorism.

“The search engine is blocked. The reason is the use of these social networks as elements of information terrorism by the Ukrainian authorities and their American curators, as malicious information dumps,” Stremousov reported.

Prior to this, YouTube, Viber, Instagram and a number of other services and resources were blocked in the Kherson region. “We have disabled Youtube a few days ago. We are now without Youtube, Instagram. But it’s okay, we get by, it’s normal, ”said Serhiy Moroz, press secretary of the Kherson Regional State Administration in early July.

“The work of the Google search engine has been slowed down, and if they don’t come to their senses and continue to adhere to the policy of disinformation and propaganda of violence, as well as dehumanizing the inhabitants of the liberated territory, they will face a similar fate — blocking,” said Vladimir Rogov, head of the council of the pro-Russian administration of the Zaporozhye region.

He recalled that Facebook, Instagram, Twitter and YouTube video hosting had previously been blocked in the region. Rogov is sure that these services did not provide people with equal conditions for expressing their own position.

In May, mobile communications and the Internet were turned off in the Russian-occupied territories of Kherson and Zaporozhye regions of Ukraine. As reported by the State Service for Special Communications of Ukraine, Russian authorities cut off fiber-optic cables and disconnected service providers’ equipment from electricity.

Then Russian mobile operators began to operate in these regions. Subsequently, Kherson and Zaporozhye were transferred to the Russian numbering plan with the telephone code “+7”.

The authorities of the DPR and LPR explained the blocking of the search engine by a large amount of misinformation on the Internet. The head of the DPR, Denis Pushilin, reproached the company for “inhuman propaganda of Ukraine and the West” and accused it of “real persecution of Russians.” GLava of the LPR Leonid Pasechnik promised to “think” about unblocking Google after the search engine “corrects” and “begins to respect people.”

Russia blocks Google in Donbas ahead of annexation referendums

Russia also accuses Google of refusing to remove “fakes” about the war in Ukraine, but so far is limited to fines. After several trials, the court began to fine the company for a certain percentage of annual revenue: in December 2021, Google LLC was assigned a turnover fine of 7.22 billion rubles, July 18 – in 21.7 billion rubles.

In June, the Moscow Arbitration Court received a lawsuit to declare Google LLC, the Russian subsidiary of Google, bankrupt. The procedure was started by the company itself: the arrests of accounts made its work in Russia impossible.