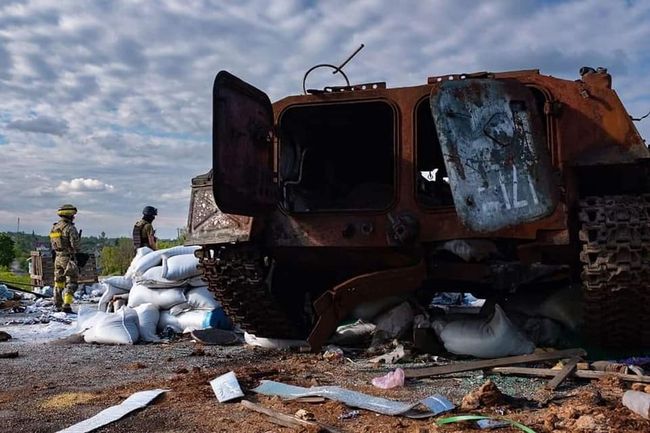 Glory to Ukraine! The one hundred and forty-eighth day of heroic resistance of the Ukrainian nation to the Russian military invasion continues. Ukrainian soldiers repulsed the offensive of the occupiers in the direction of the Lysichan refinery – Ivano-Daryivka. The enemy suffered losses and retreated, the General Staff of the Armed Forces of Ukraine reports.

On the Seversky direction the enemy continues shelling the positions of our troops in the Sumy region and carrying out aerial reconnaissance by UAVs.

On the Kramatorsk direction the enemy carried out airstrikes in the Serebryanka and Spirny regions. Artillery shelling was recorded near Siversk, Hryhorivka and Ivano-Daryivka. Enemy BpLA operational-tactical level operated near Rozdolivka and Hryhorivka.

Ukrainian soldiers repulsed the offensive of the occupiers in the direction of the Lysichan refinery – Ivano-Daryivka. The enemy suffered losses and retreated.

The weak assaults of the occupiers on the directions Klynove – Vershina, Myronivka – Vuglehirska TPP failed again.

In the South Buz direction Artillery shelling was recorded in the areas of the settlements of Holgyne, Potemkyne, Knyazuzka, Shiroke, Ternivka, Luch, Kotlyareve, Pervomaiske, Nova Zorya, Dobre and Bila Krynytsia. The occupiers unsuccessfully tried to launch a counterattack in the direction of Sukhy Stavok – Andriivka.

In the Black Sea and Azov sea zones, the enemy’s naval group focuses its main efforts on blocking civilian shipping in the northwestern part of the Black Sea. There are two cruise missile carriers outside the bases.

Personal documents are confiscated from the forcibly mobilized, who are taken to replenish their losses from the temporarily occupied territories of Donetsk and Luhansk regions. This shows the complete lawlessness of this contingent and, supposedly, should stop desertion. Also, it will not allow identification of the mentioned persons in case of death, which opens the way for various financial frauds in favor of the command staff of the armed forces of the Russian Federation.

Ukrainian soldiers are on the defensive and continue to methodically inflict losses on the Russian occupiers.

We believe in the Armed Forces of Ukraine! Together we will win!