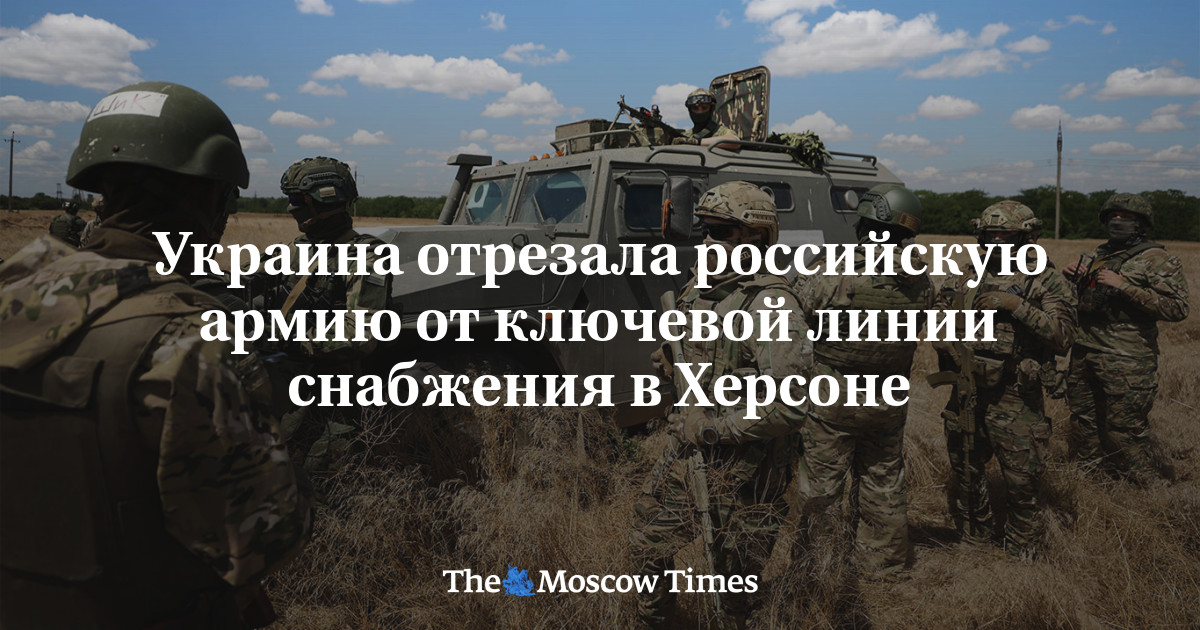 The counter-offensive of the Ukrainian armed forces, which, according to the order of President Volodymyr Zelensky, is designed to regain the lost southern territories, deprives the Russian army of a foothold in Kherson, a key city that fell in the first weeks of the war.

On the evening of July 26, the Armed Forces of Ukraine attacked the Antonovsky Bridge, one of the three crossings across the Dnieper, which is used to supply the Russian group, entrenched on the right bank of the river.

The Armed Forces of Ukraine keep strategically important logistics and transport routes under fire control, Natalya Gumenyuk, head of the press center of the defense forces of southern Ukraine, said on Wednesday. She called the attacks on the bridge “filigree”: the structure itself was not destroyed.

Antonovsky bridge is completely closed to traffic after the shelling, acknowledged the deputy head of the pro-Russian interim administration of the Kherson region Kirill Stremousov.

According to him, the strikes on the bridge were delivered from HIMARS installations, the number of which in service with the Ukrainian army could increase to 20 units after the delivery of a new package of American aid.

Some of the HIMARS missiles were intercepted by air defense systems, but all, Stremosov admitted. The propaganda TV channel Zvezda reported that a traffic jam of civilian vehicles had formed on the approaches to the bridge, and the movement of military equipment along it was no longer possible. Only pedestrians can cross the bridge.

The head of the occupation administration of the Kherson region, Volodymyr Saldo, said that last night the nearby railway bridge of the same name, the second key artery for supplying Russian troops, was also fired upon. “Two missiles also flew there,” Saldo said on air on Russia 24.

The third bridge – over the dam of the Kakhovskaya hydroelectric power station in Novaya Kakhovka – was shelled earlier, and Russian troops were trying to repair it.

Now Russian forces are trying to build a pontoon bridge across the Ingulets River near Darovka, 17 km northeast of Kherson, experts at the American Institute for the Study of War write. In order to contain the counteroffensive of the Armed Forces of Ukraine, as a result of which two more settlements (Andreevka and Lozovoye) were lost over the past day, Russia is transferring reserves of equipment: according to satellite images, several dozen 2S7 Pion howitzers were withdrawn from the 94th arsenal in Omsk.

In April, there were 170 such artillery mounts in the warehouse, in early June – 135, and on the latest available photographs, dated July 18, there are already 110. “Pion” is a Soviet 203-mm self-propelled howitzer of high power, capable of hitting at a distance of up to 47 kilometers .

The fact that Zelensky gave the order to launch a counteroffensive in southern Ukraine was announced by the country’s Defense Minister Oleksiy Reznikov in an interview with The Times on July 11.

According to him, Kyiv has managed to raise a million-strong army, which is armed with Western weapons and has the support of the “anti-Kremlin coalition” that has gathered in the world.

The US believes that there is hope that Ukraine will be able to retake a significant part of the territory in a counteroffensive in the second half of the year, told CNN sources in the Joe Biden administration.

However, they admit, the goal announced by Zelensky – to return all the lost territories by the end of the year – is hardly feasible. Some Biden advisers even discuss whether Zelensky should abandon the rigid definition of a “Ukrainian victory” and admit that the territory of his country has decreased irrevocably.

A significant counteroffensive is possible provided Ukraine gets even more weapons and training, but Russia will also be able to replenish combat power by then, CNN sources say. Therefore, success, according to them, is not guaranteed.