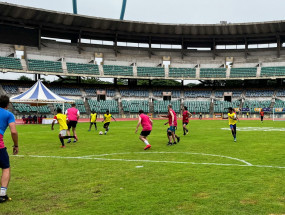 The five-time world champion was not only in his football gear but also demonstrated his moves on the football field. After the friendly match, Anand quipped, “There are many chess players who play football.

European and African teams are passionate about football. I am very interested in football and I follow the game but I don’t play much, I enjoy the game a lot. There are a lot of football players who like to play chess for relaxation, so it’s good to do it both ways.

Share
Facebook
Twitter
WhatsApp
Linkedin
Email
Telegram
Previous articleStory of Hamida Bano: Separated from family 20 years ago, social media reunites with loved ones
Next articleCall yourself a pilot on social media, cheated millions of girls, know the story of this unique thug