During the India-Pakistan match, the Indian cricket fans were saying where are you Dhoni brother, finally the camera caught them, know where is Captain Cool Mahendra Singh Dhoni 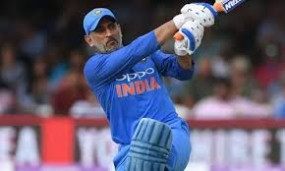 Digital Desk, Delhi. Mahendra Singh, the former captain of the Indian cricket team, who has made his mark in the world of cricket, may have retired from cricket, but even today cricket lovers not only in the country but around the world remember him because of his ability to play and make decisions. . After India’s defeat in the match between India and Pakistan in the Asia Cup 2022, Indian fans remembered former captain Mahendra Singh Dhoni and some said that if Dhoni was the captain in this match, then this match would not be Pakistan but Pakistan. India would win. Many fans wrote that where are you Dhoni bhai.

What does Dhoni do after being away from cricket, where he spends time, few people know, but it is said that no one can escape from the eyes of the camera, then how could Mahendra Singh Dhoni escape.

After all, Dhoni, who was away from the eyes of the camera for several days, was caught by the cameras. Actually, Capital Cool was seen enjoying the US Open. Dhoni was seen during the singles quarter match between young Spanish player Carlos Alcaraz and Italy’s Janic Sinar at the Arthur Ashe Stadium on September 8. Dhoni is now enjoying tennis instead of cricket.

The US Open shared the photo of Mahendra Singh Dhoni from its official Twitter handle, writing, “If you missed the look, Indian batting MS Dhoni enjoys the record-setting quarter-final between Alcaraz and Sinner on Wednesday, which 2: Ended at 50.

Dhoni is looking very happy watching this match. In the photo that has been tweeted, he is wearing a blue half T-shirt. During this, he is also seen clapping while enjoying the match.
Seeing Dhoni, one of his fans wrote, Nice to see one of the great players of India in the US Open.

However, many types of comments are coming on this post of Dhoni. Where people are liking, some do not recognize Dhoni and commenting and asking who is this person, from whom Dhoni’s fans are engaged in teaching a lesson to those who do not recognize him.

Indian cricketing royalty at the #USOpen