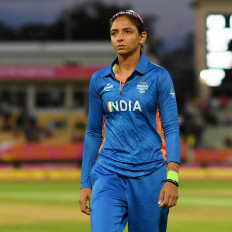 Digital Desk, Durham. Indian women’s cricket team captain Harmanpreet Kaur has said that England are a good team despite the absence of all-rounder Natalie Shiver and will not take her lightly. Harmanpreet said this on Saturday ahead of the start of the T20I series at the Riverside Ground in Durham.

The Indian captain said, I know England will miss Natalie Shiver but she is a good team nonetheless. We have to play well to beat them. The last 10 days have given us enough time to get ready and we all look better. Now it is up to him to hit the ground and execute his plans.

Harmanpreet revealed that Jemima: Rodrigues will not be available for Saturday’s match as she is recovering from a hand injury and is undergoing rehabilitation at the National Cricket Academy in Bengaluru. He said that we have to show flexibility in batting according to the situation.

Share
Facebook
Twitter
WhatsApp
Linkedin
Email
Telegram
Previous articleCharles-III was declared the new king of Britain, wife got the title of Queen Consort
Next articleAngoori Bhabhi became a victim of online fraud due to this one mistake

WTC final date revealed! There can be a clash on this ground of England, possible clash with IPL final