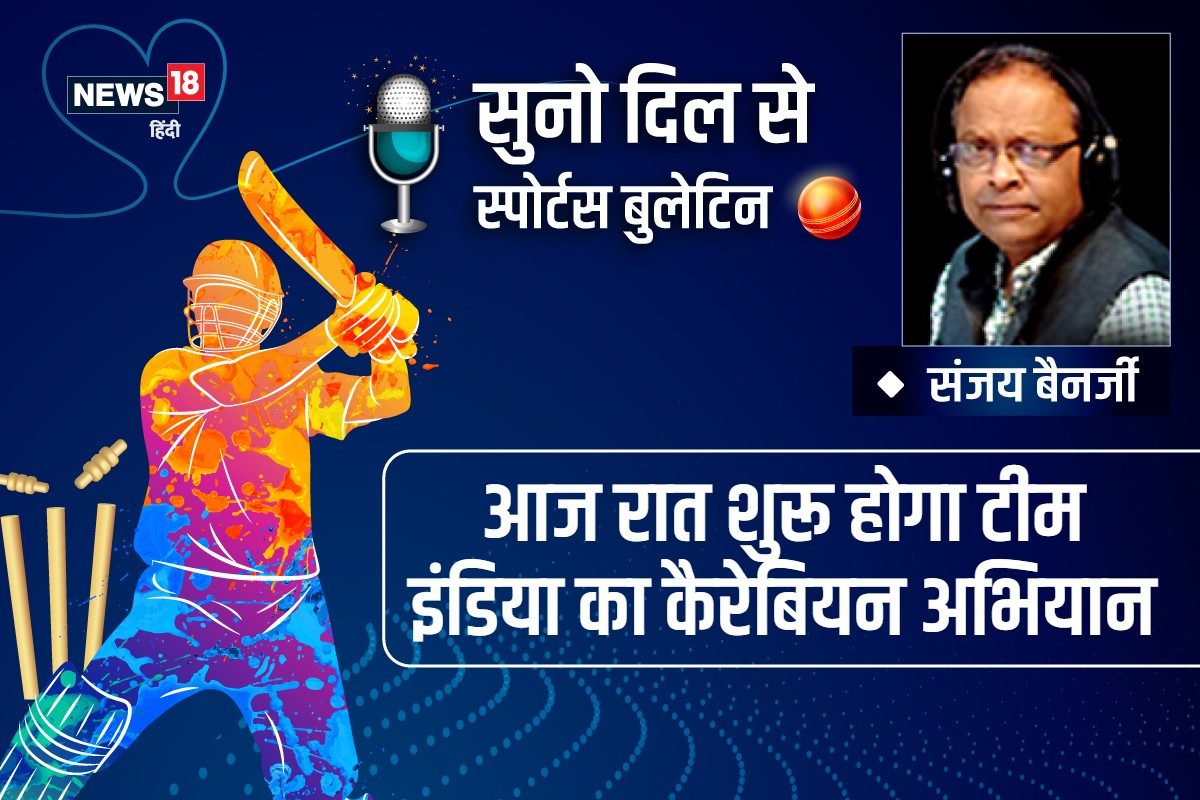 We are here to cover the cricket activities of the week – Salutations to Sanjay Banerjee – Suno Dil Se. Beginning with Team India’s Caribbean campaign starting from Port of Spain tonight. We will talk further about the recently concluded Indian team’s tour of Ireland and England. And finally the Commonwealth Games.

After touring Ireland and England for almost a month, the Indian team is now ready to try their hands twice with the West Indies. Team India will start its Caribbean campaign tonight from Port of Spain. On this tour, the Indian team has to play three ODIs and five T20 International matches.

It is difficult to say how strong West Indies will look against India. Only last week, this team was cleared by Bangladesh. After the one-sided defeat in the ODI series against Bangladesh, this will definitely be a chance for West Indies to come back. In the ODI rankings, India is ranked third and West Indies at ninth place.

India has been completely dominating in ODIs against West Indies for the last one and a half decade. Since 2006, India has won every series, whether at home or abroad, against the West Indies. Will the West Indies, who have lost bilateral series to India for 16 consecutive years, be able to break this streak this time? The last match between the two was in February this year, in which India won all the three matches played in Ahmedabad.

India had brought its young army against Ireland, it is repeating the same story against the West Indies. Shikhar Dhawan is leading, who has captaincy experience in Sri Lanka in the past as well. Team India captain Rohit Sharma and Virat Kohli are not included in the Indian team, due to this the players who are getting the opportunity, they need to take full advantage.

Rohit will take over the captaincy in the subsequent T20 series, while Virat Kohli will not be present there either. In the absence of Hardik Pandya, Rishabh Pant, Jasprit Bumrah and even Mohammed Shami, West Indies have a great chance to dominate.

The captaincy of West Indies is being handled by Nicholas Pooran, who will be helped by Shai Hope. One of the reasons for West Indies’ loss against Bangladesh has been the absence of all-rounder Jason Holder, who was rested in the series. But now Holder is ready to play against India.

With his arrival, there is the same enthusiasm in the Caribbean team as there is when Virat Kohli comes to the Indian team. Players like Alzarri Joseph, Rovman Powell, Keemo Paul and Brendan King are present in the West Indies team to give a tough competition to India in ODIs.

Meanwhile, the recently concluded Indian team’s tour of Ireland and England can be considered mixed. Different teams participated in both the countries and the selectors got a chance to try many players. India won both the T20 series against Ireland and England. Whereas India also captured the ODI series.

There will be an ODI World Cup next year and before that the T20 World Cup is also to be held this year. For India, there is a need to complete all the experiments in both these formats in time.

If you look at last week’s series against England, two special things can be seen. One is that Virat Kohli is still looking for form. The same situation is more or less with Rohit Sharma as well. Due to the flop of both the main players, some questions definitely arise about the strength of the Indian team. But on the other hand, the way Hardik Pandya and Rishabh Pant performed, it should be appreciated.

The way both of them batted, it also got the message that the pressure on Team India due to the absence of Kohli or Rohit – it was a little less. In between, Ishan Kishan and Suryakumar Yadav and Deepak Hooda also took charge for some time, but despite all of them not running consistently this time in the shorter format, India won thanks to Pant and Hardik. Bowling with Hardik is also a plus point, playing whom was a headache for the English batsmen.

With Shikhar Dhawan being made the captain of ODI, Hardik or Bumrah can get a chance to captain again only after Rohit Sharma is rested or unfit. But the way Hardik and Bumrah have bowled, it is easy to believe that both are the backbone of the Indian team.

On the other hand, the tour of England also proved that Umran Malik and Avesh Khan still have to prove their worth. Especially Umran Malik disappointed, his balls are unnecessarily causing extra runs to be wasted. Both have to focus on their line and length. This is the reason why Umran Malik has not been kept in any format on the tour of West Indies. However, Avesh Khan is included in both the teams.
The top order’s performance in the ODI series against England was disappointing. Rohit, Dhawan, Virat or Suryakumar could not give color to the innings. In contrast, the middle order has given a lot of confidence, as Pant, Pandya and Jadeja handled the load well in this order. Captain Rohit Sharma himself also admitted that there is a need to remove the flaws of the top order.

As far as Rishabh Pant is concerned, he has expressed that he is now fit in all Tests or ODIs. The way Rishabh scored a century in Old Tafford’s last ODI is commendable. Coach Rahul Dravid seems to have worked a lot on his wicket throwing weakness. Pant has handled the innings on critical occasions many times before. This time too, if he had not batted responsibly in the third ODI, England could have captured the ODI series.

The Indian team also got an advantage of winning the series in England that it has overtaken Pakistan to take third place in the ODI team rankings. New Zealand is in first and England in second place. While Pakistan is in fourth place, whose next series is to be held in August.

Five Indian players are busy playing county cricket in England these days. Currently, except for Krunal Pandya of Warwickshire, all four are playing in the current round. Playing for Kent, Navdeep Saini took five wickets for 72 runs against Warwickshire. However, he got out for zero in batting.

Washington Sundar also took five wickets for 76 runs against Northamptonshire while playing for Lancashire. His batting was poor and could score only two runs. Umesh Yadav did not get any wicket in the first innings despite giving 76 runs against Sussex while playing for Middlesex. On the other hand, Cheteshwar Pujara again scored a double century against Middlesex in the County Championship being held after the break.

Playing his seventh match, he scored his fifth century, in which there are three double centuries. Pujara, who was captaining the match, scored 231 runs in his 403-ball innings with the help of 21 fours and three sixes. So far Pujara has scored 997 runs. In the County Championship, only Pakistani player Shan Masood of derbyshire and Ben Duquet of Nottinghamshire are ahead with more runs than Pujara. Today is the last day of four day matches.

And finally the Commonwealth Games. For the first time in the Commonwealth Games, there is enthusiasm about women’s cricket. When these games will be inaugurated on 28 July, then the very next day the Indian women will compete with the Australian team of Mag Lanning. Whereas on July 31, there will be a match between India and Pakistan, due to which cricket lovers of both the countries have bought a large number of tickets in Birmingham. India’s third match will be against Barbados, many of whose players play for West Indies. By the way, the Indian team is expected to win a medal under the captaincy of Harmanpreet Kaur.

This was it, our podcast on the cricket activities of the week – Suno Dil Se – See you again next week, Namaskar.

Share
Facebook
Twitter
WhatsApp
Linkedin
Email
Telegram
Previous articleMykolayiv pyrotechnicians inspect the fields before harvesting grain
Next article‘This is not a time of arrogance, but a time of unity’: Margaret Alva expresses hope from Mamata Banerjee for Vice Presidential election