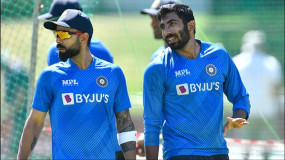 Digital Desk, Mumbai. The International Cricket Council (ICC) released the ODI rankings on Wednesday 20 July, in which Indian bowlers Jasprit Bumrah and Virat Kohli have suffered losses. Both the giants have lost a notch each.

Indian fast bowler Jasprit Bumrah, who performed brilliantly in the first match of the recently concluded ODI series between India and England, surpassed New Zealand’s fast bowler Trent Boult to become the number-1 bowler in the ODI rankings, but England’s He had to lose the No. 1 position due to injury in the third ODI against him.

In the latest ICC ODI rankings, Trent Boult is at the first position with 704 rating points and Bumrah is second with 703 rating points. Apart from Jasprit Bumrah, no Indian bowler is included in the top-10.

Former Indian captain Virat Kohli has been battling poor form for the past several months, which is also affecting his ranking. Virat, who remained at the top of the rankings for a long time, has lost a place this time. Virat has now slipped to the fourth position in the ODI rankings, while South African batsman Russ van der Dussen, who scored a century against England in Durham yesterday, has jumped four places to occupy the third position.