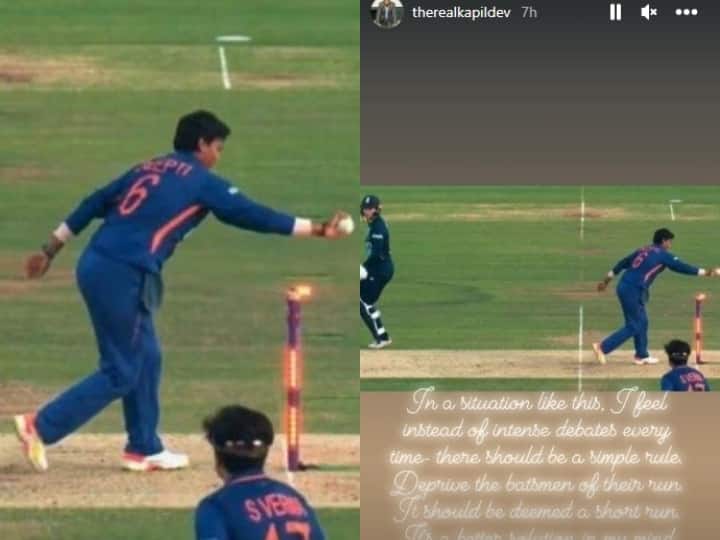 Kapil Dev On Mankading Controversy: During the third ODI at Lord’s, England batsman Charlotte Dean Indian all-rounder Deepti Sharma got Mankading out. After which many former cricketers criticized Deepti Sharma by saying ‘Spirit of Cricket’. Actually, Lord’s ODI was the last international match of Indian legend Jhulan Goswami, but Jhulan Goswami did not get much headlines after Deepti Sharma’s Mankading. However, the cricket world seems to be divided on this, but most cricketers believe that Deepti Sharma did nothing wrong.

What did Kapil Dev say on the Mankading controversy?

Now former Indian cricketer Kapil Dev has given his reaction on this controversy. He said that in such a situation, there should be a simple rule of interest for more debate. At the same time, he said that if the batsmen leave the crease before throwing the ball, then they should be declared as short runs. At the same time, now Indian all-rounder Deepti Sharma has put her side. He said that I warned the batsman many times, but when the batsman ignored the warning, then I did so. He further said that it was part of our plan, because the batsmen were doing this again and again.

‘What we did was not against the rules’

Indian all-rounder Deepti Sharma said that what we did was not against the rules, but according to the rules. Deepti Sharma says that apart from repeatedly warning the batsman, she also complained about this to the umpire, but everyone did not pay much attention to my words. After which I was forced to do so. Whatever I did was right according to the law of cricket, there was nothing wrong in it. Significantly, after winning the last match, the Indian team won the ODI series 3-0 and gave a memorable farewell to Jhulan Goswami.

Duleep Trophy: Ajinkya Rahane said for the first time on sending Yashasvi Jaiswal off the field, know what he said

Share
Facebook
Twitter
WhatsApp
Linkedin
Email
Telegram
Previous articleHina Khan is wreaking havoc on the beach in Maldives, fans are sighing after seeing pictures
Next articleYeh Teri Meri Yaari… Not only Nadal-Federer, the stories of friendship of these leaders will also surprise you