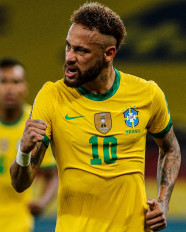 Rio de Janeiro. Neymar will be set to play an offensive role for Brazil at this year’s Qatar World Cup, as five-time world champions look to capitalize on his stellar form for Paris Saint-Germain.

The 30-year-old Neymar has scored nine goals and made seven assists in eight appearances in all competitions for PSG this season. He is playing freely.

As reported by Xinhua, he moved from Barcelona to PSG in 2017. Neymar has so far continued to play as a striker for Brazil, as he did during his four seasons at Camp Nou.

In an interview broadcast on Brazilian television on Tuesday, Tite said Neymar’s creative ability is impressive. When he is at his best physical and technical level, he plays better. He plays very fast and is able to avoid tackles.

Brazil are grouped with Serbia, Switzerland and Cameroon for the World Cup to be played in Qatar from 20 November to 18 December.

Tete has said that he will step down as manager after the World Cup. He denied reports that he had promised 39-year-old right-back Dani Alves to the team.

Alves, who joined Mexico’s UNAM Pumas in July after splitting from Barcelona, ​​had made public his desire to move to Qatar after being ruled out of the last World Cup in Russia with a knee injury.