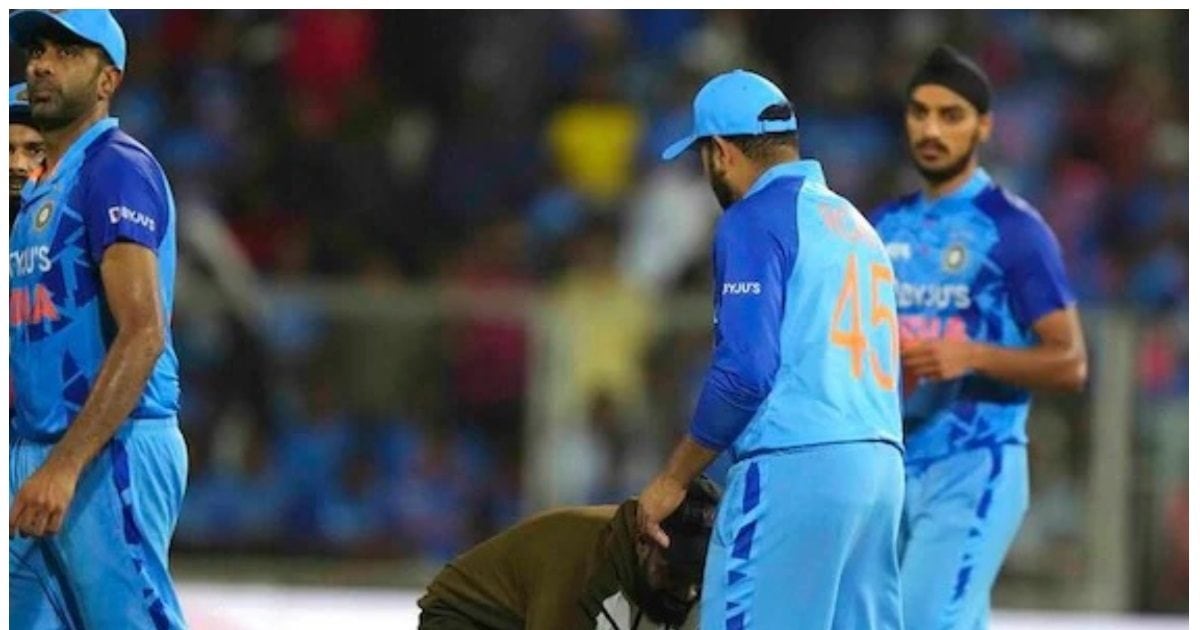 New Delhi. Team India has started with a win in its last assignment before the ICC T20 World Cup. The Indian cricket team defeated South Africa by 8 wickets in the first match of the 3-match T20 series on Wednesday (28 September). A surprising moment was seen in this match when a fan reached the middle ground. This fan came running on the ground and fell at the feet of Rohit Sharma.

When the Indian team was wreaking havoc with the ball in the first innings of the match, a fan breached the security cordon and ran towards Rohit. After reaching the captain Rohit Sharma, this fan knelt down and touched his feet. The pictures of this fan are going viral on social media.

Let us tell you that this is not the first time that a fan of Rohit Sharma is running on the pitch to shake hands or touch feet. Most of the Indian players living in the country who are crazy about cricket have become accustomed to it. Such incidents are often seen on the field with Sachin, Dhoni, Virat and Rohit.

Rohit Sharma won the toss and decided to bowl first on a flat pitch. Without pacers Jasprit Bumrah and Bhuvneshwar Kumar, the responsibility of sharing the new ball was between young Arshdeep Singh and Deepak Chahar. Both of them swung the ball in both directions at high speed. In a few overs, South Africa’s team was playing with 9 runs for the loss of 5 wickets.

The Greenfield stadium was expected to be full of runs, but the highest performance of swing bowling sent the Proteas batsmen back to zero. Keshav Maharaj and Wayne Parnell took South Africa to over 100, but defending a total of 107 against an Indian batting line-up full of star players was going to be difficult from the start.

Team India’s death over specialist ready to wreak havoc with the new ball, bowled with a coach’s advice and sharp

Chasing the target, Indian openers KL Rahul and Rohit Sharma were impressed by the pace of South African pacers Kagiso Rabada, Parnell and Enrique Norcia. Rohit soon returned to the pavilion and soon after superstar Virat Kohli supported KL Rahul. When it seemed that South Africa was catching on, India’s No. 4 batsman Suryakumar Yadav showed his style. Rahul played Suryakumar Yadav’s side.

Suryakumar scored a half-century at a strike rate of 151.51, while Rahul completed his half-century by hitting a six off spinner Tabrez Shamsi. India won the match by 8 wickets with 20 balls to spare. The second match of the series will now be played on October 2.

Share
Facebook
Twitter
WhatsApp
Linkedin
Email
Telegram
Previous articleWill Vijay Salgaovar confess to the crime or is there some other mystery? Brilliant teaser of ‘Drishyam 2’ released
Next articleWill not get such a big discount on Smartphone again! People are taking advantage of Amazon sale, see full list of offers here