Sachin Tendulkar liked this six of Virat, said- ‘The six that Rauf hit in the 19th over…’ 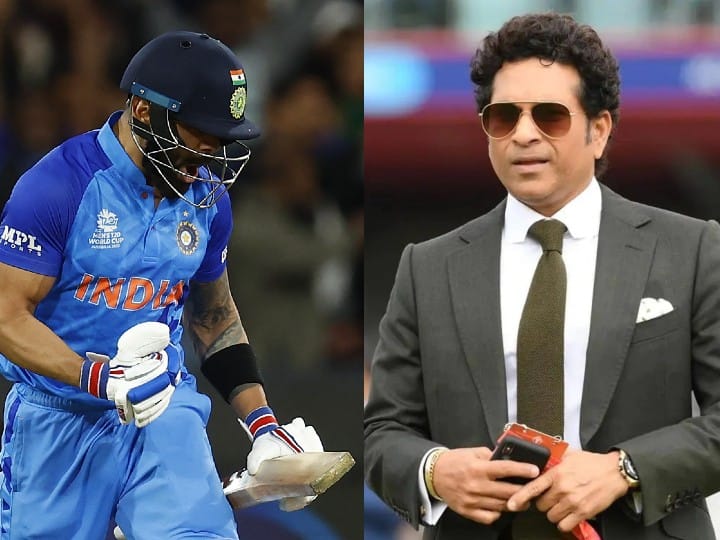 Sachin Tendulkar on Virat Kohli: The Indo-Pak (IND vs PAK) match played on Sunday in the T20 World Cup 2022 crossed all limits of adventure. In this match of tremendous ups and downs, India won the last ball. Virat Kohli played the biggest role in this victory of India. He made a victory that seemed impossible at one time possible.

The great cricketer Sachin Tendulkar also became a fan of this innings of Virat. After the match, he made a special tweet for Virat. In this, he also mentioned the long on six by Virat Kohli in the 19th over.

Sachin wrote, ‘Definitely the best innings of your life. It was great to see you play. Especially in the 19th over of Haris Raup, who hit a six on long on from the back foot was worth watching.

,@imVkohli, it was undoubtedly the best innings of your life. It was a treat to watch you play, the six off the back foot in the 19th over against Rauf over long on was spectacular!
Keep it going. #INDvPAK #T20WorldCup pic.twitter.com/FakWPrStMg

28 runs were needed off 8 balls, then Virat hit a six
The six that Sachin mentioned here came on the fifth ball of the 19th over. Then India needed 28 runs off 8 balls to win. Here the match was completely in the possession of Pakistan. Here Virat raised India’s hopes by hitting a brilliant six at long on off Haris Rauf. Virat did not stop here, he also hit Rauf for a six in the next ball. After this, India needed 16 runs in the last over, which was completed in a very interesting way.

Virat Kohli played a wonderful innings of 82 runs in 53 balls in this match. After the match, he described this innings as one of his most brilliant innings.

T20 WC 2022: Virat’s bat makes a lot of runs in Australia, know how the performance of Indian batsmen has been here

PAK Vs ENG: Will the first Test between Pakistan and England start on time? Big update surfaced