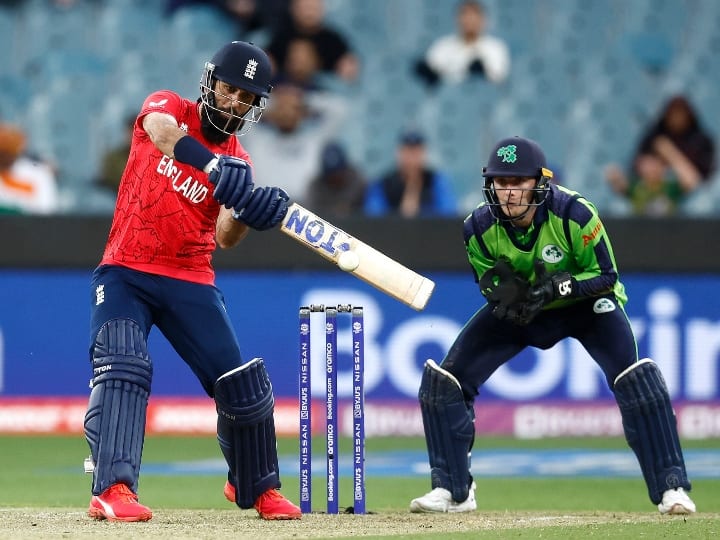 IRE vs ENG, T20 WC: Due to rain in the match played between England and Ireland, Ireland won this match by 5 runs through Duckworth Lewis. This match between England and Ireland in Super-12 was played in Melbourne. It was a thrilling match. In this match, England won the toss first and decided to bowl. Coming to bat first, Ireland were bundled out for 157 runs in 19.2 overs. For Ireland, team captain Andrew Balbirnie played an innings of 62 runs in 47 balls. His innings included 5 fours and 2 sixes.

England’s batsman did not show strength

The England team, who came out to bat later, had a bad start. Opening batsman Jos Buttler returned to the pavilion without opening the account. After this Alex Hales also got out after making 7. David Malan took a few innings, but after scoring 35 runs, he was also seen returning to the pavilion after losing wickets. At the same time, Ben Stokes (6) and Harry Brooke (18) could not contribute much for the team.

At the same time, rhythm appeared in Erin’s bowling. Joshua Little took 2 wickets for 16 runs in 3 overs. Apart from this, Barry McCarthy, Fionn Hand and George Dockrell took 1-1 wickets. England team was 5 runs behind Ireland before the rain started. Ireland got the advantage of this thing.

Share
Facebook
Twitter
WhatsApp
Linkedin
Email
Telegram
Previous articleThere is always a fighting atmosphere in the house, so stay away from the daily routine like this
Next articleTake these precautions while carrying a new dress, don’t forget to ignore these things