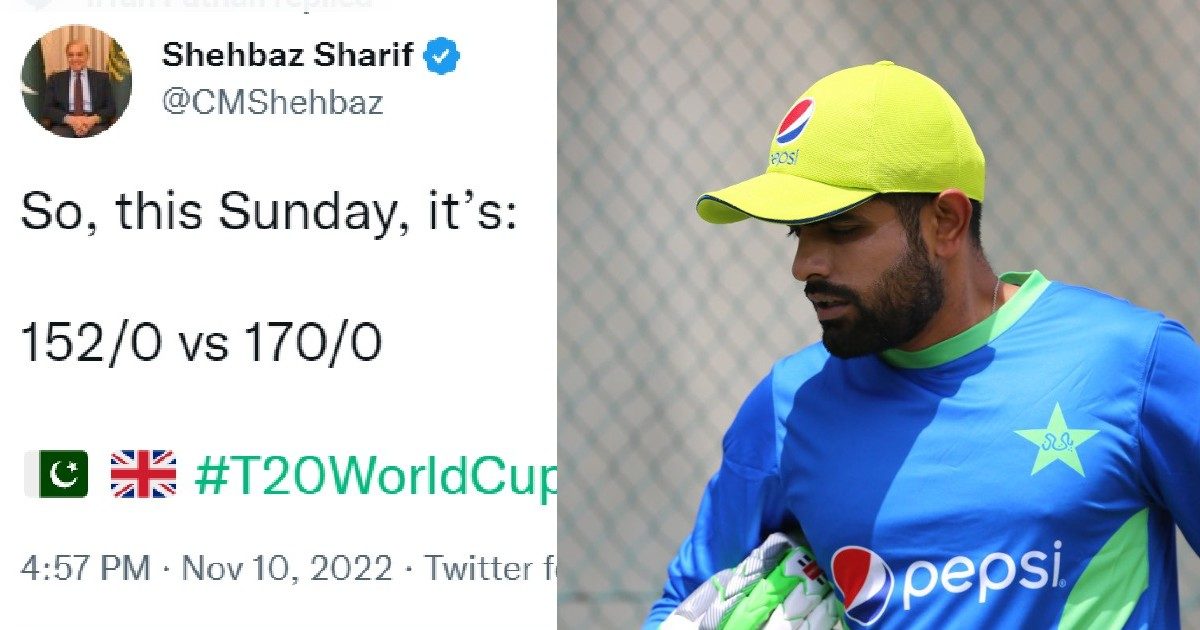 England chased down the target of 169 runs in the semi-finals without losing a wicket.

New Delhi. Pakistan captain Babar Azam discussed with the media before the T20 World Cup final against England on Saturday. During this, he has been asked a question about Prime Minister Shahbaz Sharif’s tweet after India’s semi-final loss against England. After India’s defeat, the Pakistan Prime Minister took a dig at Team India, saying: “So, this Sunday, it is: 152/0 vs 170/0.

During the press conference ahead of the T20WorldCup final, Babar was asked about such social-media posts and whether they put extra pressure on the side. Babur said, “There is no such pressure. But sorry I didn’t see this tweet so I have no idea about it. But yes, we just try to give our best against the opposition.

India got a crushing 10-wicket defeat in the semi-finals
Chasing a target of 169 runs in the semi-final between India and England, the English team won with all ten wickets and four overs to spare. Last year, Pakistan defeated India by all ten wickets while chasing 150 runs in the 2021 T20 World Cup. Babar Azam-led Pakistan will take on England in the final of the T20 World Cup at the Melbourne Cricket Ground. Before this match, it is discussed that there is an uncanny similarity between this tournament and the 1992 50-over World Cup, which Pakistan won under Imran Khan’s leadership.

Will try to take home the trophy: Babar
Babur said, “Of course, there are similarities. We will try to win the trophy, it is a great honor for me to lead this team and especially on this big ground. We will try to give our 100 percent and win. We didn’t start well, but the way our team came back and fought like a lion.

Sourav Ganguly made a big prediction about women’s cricket, said- In the next 3 years…

Coaches should be separate for limited overs and Tests, Jos Buttler supported

Similarities in both the 1992 and 2022 World Cups
There is a lot of similarity between the 1992 and 2022 World Cups. Pakistan started their campaign with a defeat at the Melbourne Cricket Ground. In both the tournaments, Pakistan had to face defeat at the hands of India as well. The similarity goes even further. In both the tournaments, Pakistan made it to the semi-finals by one point on the last day.

Excited instead of nervous: Babar
Pakistan captain Babar Azam is just one match away from equaling the feat of his countryman Imran Khan and says he is “more excited than nervous” about it. Pakistan’s team will take on England in the final of the T20 World Cup at the MCG on Sunday. Babar said on Saturday, “I am more excited than nervous because we have performed brilliantly in our last three matches.”