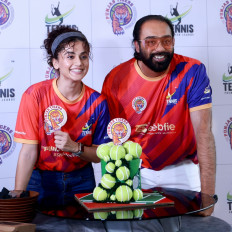 Digital Desk, Pune. Punjab Tigers is the latest franchise that has become a part of Tennis Premier League and is all set to compete in the fourth season of India’s premier tennis tournament.

TPL is returning for its fourth season this year, which will be held in Pune from December 7 to December 11.

All the franchises will play a total of four matches to qualify for the semi-finals. Men’s singles, women’s singles, mixed doubles and men’s doubles will be played between each of the franchises. There will be 80 points at stake in each match between the two franchises, where each match will be worth 20 points.

The Punjab Tigers co-owner expressed his happiness on being a part of the Tennis Premier League, he said, “I have been a sportsperson and an athlete all my life. In my youthful days, I played national level sports so, I know how important sports with added value are in one’s life.

She said, I have always been fond of sports and fitness. I believe that sports not only have the power to help a person achieve physical fitness, but great mental fitness as well. I am very excited for the league to start as I get immersed in the match well. I am sure the league will further help us to explore the potential of tennis in India.

Share
Facebook
Twitter
WhatsApp
Linkedin
Email
Telegram
Previous articleExclusive: After the death of his wife, when Rahul Dev shifted to Delhi to take care of his son, this is how he returned to Mumbai
Next articleBefore the IND vs AUS match, there was a big ruckus in the Mohali stadium, questions were being raised on the PCA president