The country got the first Anglo-Indian BCCI President, won the World Cup as a player and coach 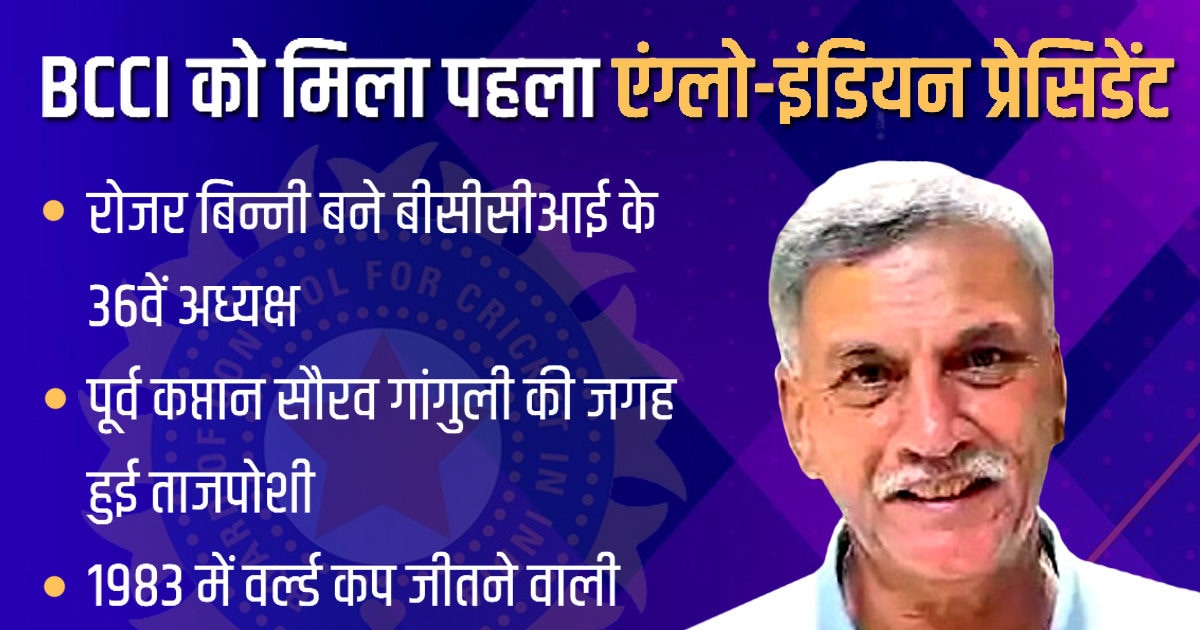 Roger Binny was included in the 1983 World Cup squad

New Delhi. Roger Binny has become the new President of BCCI. His name was stamped on the AGM of BCCI held on Tuesday. He is the first Anglo-Indian to reach here. He replaced former Indian captain Sourav Ganguly. Binny’s tenure will be 3 years. At present he is also the President of Karnataka State Cricket Association. Binny had contributed significantly to Team India’s first World Cup in 1983 as an all-rounder. He has also led the Indian Under-19 team to the World Cup title in 2000 as a coach. Earlier, he was also included in the 5-member selection panel of BCCI.

Roger Binny, 67, made his international debut in November 1979 with a Test against Pakistan. However, he could not take wickets in this match. But scored 46 runs in the first innings of the match. This match was a draw. The next year he made his ODI debut against Australia. But his performance in the 1983 World Cup is still remembered by the fans. He took the highest 18 wickets in the tournament and played an important role in making the team the champion.

feat done in the very first match
In the first match of the 1983 World Cup, India defeated West Indies by 34 runs. Apart from scoring 27 runs in the match, he also took 3 wickets. He also took 2 wickets against Zimbabwe in the next match. The team defeated Australia in the group round. In this match, Binny scored 21 runs and took 4 wickets. Talking about the final, he took one wicket for 23 runs in 10 overs against West Indies.

Showed amazing in World Championship too
Team India also won the title of World Championship held in Australia in 1985. 7 great teams including India, Pakistan, Australia and West Indies had landed in it. India defeated Pakistan by 8 wickets in the final. In this tournament too, Roger Binny took 17 wickets. He played 27 Tests in his overall career and took 47 wickets at an average of 33. His best performance was 6 wickets for 56 runs. He also scored 830 runs with the help of 5 half-centuries. Played the biggest innings of 83 not out.

First win at Lord’s
In June 1986, the Indian team won a Test match for the first time at Lord’s. Earlier, in 8 out of 10 Tests played, the team had lost, while 2 Tests were drawn. Roger Binny also contributed significantly to the victory in the match. He took 3 wickets in the first innings. He also took a wicket in the second innings. He took 205 wickets at an average of 36 in 136 matches of first class cricket. 8 wickets for 22 runs was the best performance. He also scored 6579 runs with the help of 14 centuries and 33 half-centuries. Played the best innings of 211 not out.

Looking at the performance of Roger Binny in ODIs, he took 77 wickets in 72 matches at an average of 29. Best performance was 4 wickets for 29 runs. He also scored 629 runs at an average of 16. 57 runs was the best score. His son Stuart Binny also played for India in international matches. Although his career was not as good as that of his father.

Share
Facebook
Twitter
WhatsApp
Linkedin
Email
Telegram
Previous articleMake groundnut barfi on Diwali 2022, its benefits will surprise you, many serious diseases will go away
Next articleThere will be immediate relief in the problem of gas, acidity and heartburn in pregnancy, follow these measures