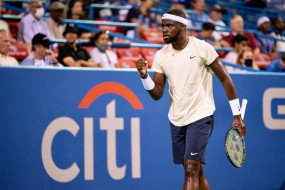 Digital Desk, New York. America’s Francis Tiafo made a rousing performance to beat 22-time Grand Slam champion Rafael Nadal of Spain 6-4, 4-6, 6-4, 6-3 to reach the quarterfinals of the US Open. The 24-year-old Tiafoe has reached the Grand Slam quarterfinals for the second time since the 2019 Australian Open. Tiafo, playing without any fear, won in three hours and 31 minutes.

This is Tiafo’s third win against the top five players. He became the first American male player since John Isner in 2018 to reach Flushing Meadows’ last eight. With this, he became the youngest player to achieve this feat since Andy Roddick in 2006.

Tiafoe said after the match, “My happiness knows no bounds.” I can’t believe it. I performed incredible tennis. I don’t know what happened after all.

The American had won a set against Nadal in his last two encounters but here he stunned Nadal with 49 winners to avenge his loss in the quarterfinals of the 2019 Australian Open. Tiafo will next face Russia’s Andrei Rublev, who defeated Britain’s Cameron Nori 6-4, 6-4, 6-4.

With this defeat, Nadal’s dream of winning a fifth US Open title was shattered. Number one Nadal’s loss in the rankings has opened the way for his compatriot Carlos Alcarez and Norway’s Kasper Rudd to become the new number one.