VIDEO: Pandya again showed his mettle, before finishing the match, hinted to Karthik – ‘I am not’ 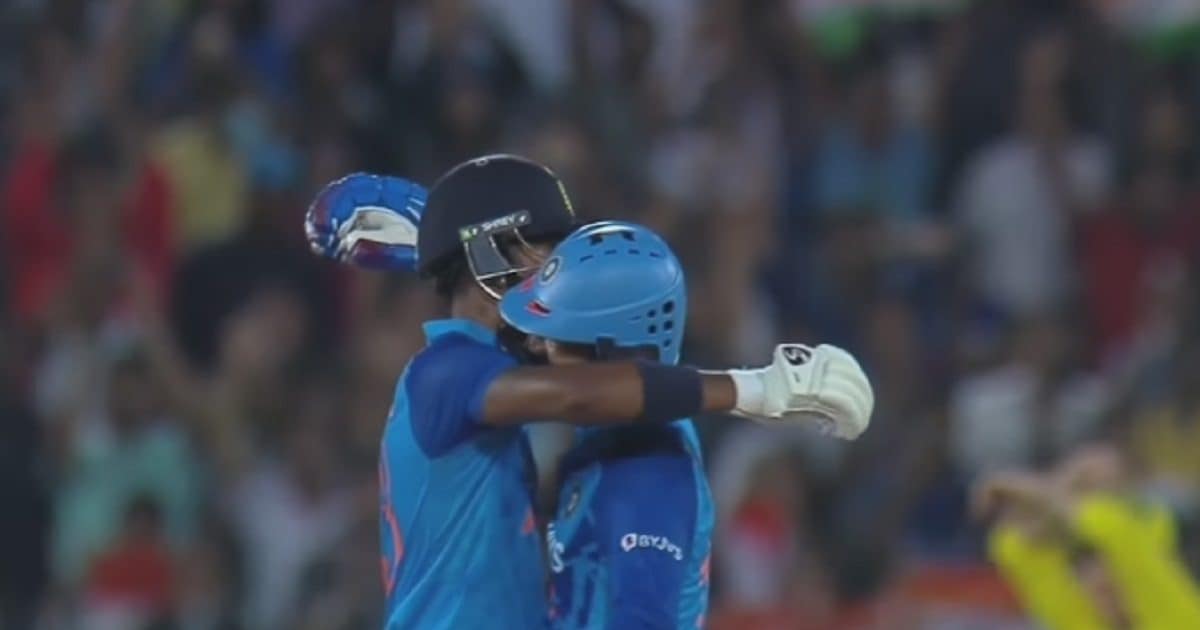 Earlier, Pandya had made a special gesture to Karthik

New Delhi. Ever since Hardik Pandya returned to Team India after injury, he has been contributing to the team’s victory with both the ball and the bat. In the third and deciding T20 against Australia in Hyderabad, Hardik played the same role and helped India win by 6 wickets, playing well with Virat Kohli standing from one end. The winning four of this match came out of Hardik’s bat. The video of what Hardik did before playing this shot is going viral.

Actually, India needed 11 runs in the last 6 balls. Virat Kohli and Hardik were at the crease. Danielle Sams comes to bowl this over. Kohli hit a six on his first ball. However, he was also out on the very next ball. Now India needed 5 runs to win in 4 balls. Dinesh Karthik came out to bat and took 1 run off the very first ball. Hardik was on strike now. No run came off Sams’ fourth ball. Now the equations had changed and India needed 4 runs in just 2 balls.

Pandya gestures to Karthik
Then the camera in the field went to Pandya and once again that picture was captured, in which the confident Pandya was seen pointing to Karthik standing at the other end and assured that there is nothing to worry – I am right. Just after this gesture, Pandya ended the match with a four on the next ball and after 9 years, India won the T20 series at home from Australia. Pandya scored an unbeaten 25 off 16 balls.

Pandya had also won the Asia Cup by hitting a six.
This isn’t the first time. When despite the pressure, Pandya did not disperse and returned after winning the match to the team. Earlier, there were some similar situations in the opening match against Pakistan in the Asia Cup as well. India needed 7 runs in the last over and Mohammad Nawaz came to bowl this over. Ravindra Jadeja was on strike and Hardik Pandya at the other end. Ravindra Jadeja got clean on the very first ball of Nawaz.

IND vs SA: The man who changed the history of the world, taking inspiration from him, Bavuma’s army came to defeat India

Suryakumar Yadav became the highest run scorer in T20 this year, know what number Rohit and Virat are at

After Jadeja’s dismissal, Dinesh Karthik came to the crease and like in the Hyderabad T20 against Australia, he took 1 run off his very first ball and gave the strike to Pandya. Pandya could not take a run on the third ball. After this, when Karthik looked at him, Pandya shook his head and said that ‘nothing to worry’ and on the fourth ball, Pandya ended the match by hitting a six. Even then this video of him pointing to Karthik went viral.

Share
Facebook
Twitter
WhatsApp
Linkedin
Email
Telegram
Previous articleJai Santoshi Maa: The film for which people pledged utensils, whose hymns became famous C. Arjun
Next articleiPhone 14 is available for half the price! Do not buy iPhone 13 or iPhone 12 after knowing this offer