VIDEO: Rohit and Virat celebrated VIRAL, watched the match sitting on the stairs of the dressing room 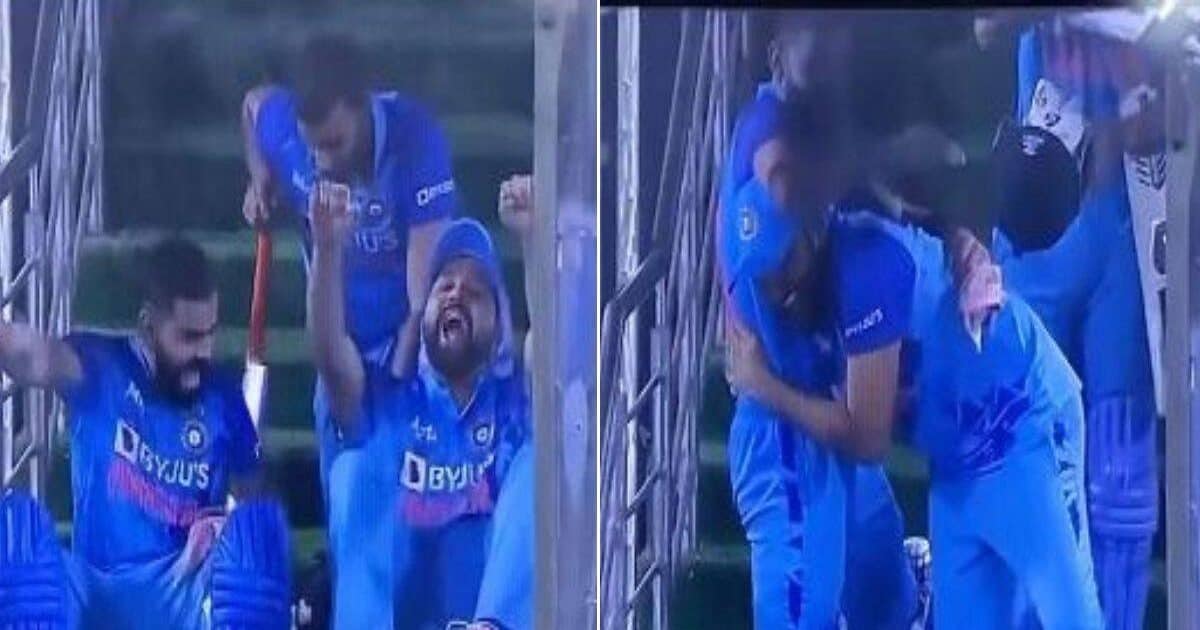 India beat Australia 2-1 in the series.

India had lost to Australia in the first match.

After this, India won both the matches in a spectacular manner.

New Delhi. India skipper Rohit Sharma and Virat Kohli looked elated at their team’s thrilling six-wicket win over T20 world champions Australia in Hyderabad on Sunday (September 25). When Hardik Pandya hit the winning boundary off Daniel Sams in the last over, the reaction of Virat Kohli and Rohit Sharma was about to be seen.

Virat Kohli and Rohit Sharma were sitting on the stairs of the dressing room. As soon as Hardik Pandya took the ball across the boundary and India won the match as well as the series. Both stood up from the stairs and hugged each other. The video of this spectacular celebration of victory between the two is going viral on social media.

Rohit and Kohli hugged each other. After this, Virat patted Rohit’s back fiercely, after which both of them started laughing. This unique celebration of Virat and Rohit also gave a chance to the fans to laugh. Seeing this video of Rohit and Virat, the fans are also unable to stop their laughter and are also commenting fiercely on this funny video. Let us tell you that for some time there were rumors about the tension between Kohli and Rohit, but after this celebration of Rohit and Virat, the fans are saying that where is the brother’s quarrel.

Earlier, Virat Kohli congratulated Rohit Sharma on his half-century by patting him on the back. On winning the match, Virat patted Rohit on the back as if there was a competition going on between the two.

Us when we find out that #TeamIndia will be in action once again!

Chasing 187 for India, Suryakumar Yadav (69 off 36) and Virat Kohli (63 off 48) performed brilliantly with the bat, while all-rounder Hardik Pandya played an unbeaten knock of 25 off 16 balls. Two fours and a six were included. With this, India won the three-match series 2-1 and now the team will host T20 matches against South Africa from Wednesday (28 September).

Rohit Sharma said that there are areas on which work still needs to be done. In the post-match presentation, he said, “We want to do well in all departments. The batting has been great for the last eight or nine games, but we want to play more aggressively. Regarding bowling, he said, “Bowling is the main focus. Improvements in fielding go on continuously and we will continue to do so.”