Was trained in America for four months before CWG 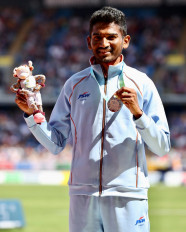 Digital Desk, New Delhi. Avinash Sable created history in the recently concluded Commonwealth Games when he became the first Indian to win a medal in the 3000m steeplechase event at the tournament. Sable, who won the silver medal by just 0.05 seconds behind Abraham Kibivot, said during the launch event of the Vedanta Half Marathon that he had gained confidence while training in the US ahead of the Commonwealth Games. Before the Commonwealth Games, I trained in the US for four months.

That’s where I got a lot of confidence. I wanted to win a medal at any cost, and I prepared well for the event. In the last 500 meters of the race, I thought I could win the gold too and I tried hard, but unfortunately, I couldn’t finish first.

The registration for the 17th edition of Vedanta Delhi Half Marathon began on September 1 after a grand launch event in the capital city. The event was attended by several sports role-models including Anju Bobby George, Avinash Sable, Nikhat Zareen, Sardar Singh, Aldhos Paul, Sharad Kumar and Vijender Singh.

Share
Facebook
Twitter
WhatsApp
Linkedin
Email
Telegram
Previous articleIndia will shatter China’s dream by building a route from Vladivostok in Russia to Chennai, know the plan
Next articleTaking a loan from this bank will be expensive, EMI installment will also increase, check if this is your bank?