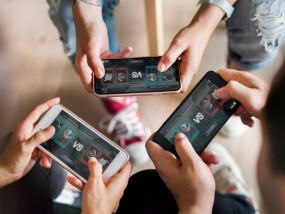 Digital Desk, New Delhi. The size of mobile gaming in India is growing rapidly, with three out of four brands significantly increasing their investments in mobile gaming advertising in the past year. This information has been given in a report on Thursday. According to the report, 75 percent of brands have been advertising on mobile game apps for more than a year, which has led to a two-fold increase in gaming ad spend since the pandemic.

According to InMobi’s Mobile Game Advertising 2022 report, mobile gaming advertising saw a 2-fold increase in ad spend (on-ear), as 97 percent of marketers who advertise on mobile gaming environments said they were satisfied with the results.

Rishi Bedi, Asia Pacific Managing Director at InMobi, said, “Mobile game advertising is only evolving as a trend as audience reach continues to grow, ad formats diversify and ad budgets continue to grow. Bedi said, over time, more and more advertisers are incorporating mobile game ads into their media mix due to the positive results and impactful results.

The mainstay of mobile gaming advertising is large audience numbers. According to the report, gaming saw a 32 percent year-on-year increase in average spend by advertisers. According to the latest data provided by the Internet and Mobile Association of India (IAMAI), there are over 43 crore mobile gamers in India and this number is expected to increase to 650 million by 2025.

As the Indian gaming market is poised to reach $3.9 billion (in value) by 2025, over 40 percent of hardcore mobile gamers are paying for their games with an average spend of Rs 230 per month.

Share
Facebook
Twitter
WhatsApp
Linkedin
Email
Telegram
Previous articleRanthambore Tiger Reserve: Ban on half-day and full-day jungle safari, tourists will get these 2 options
Next articleINS Nistar will be seen in new avatar, once did diving operation on Pakistan’s submarine Ghazi

Baggers of these documents will not be able to withdraw even a single penny from NPS account, know details