India needs to be self-reliant in semiconductor technology 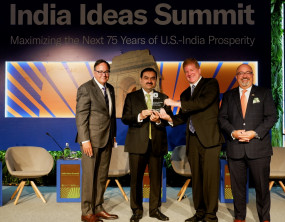 Digital Desk, New Delhi. Billionaire businessman and Adani Group Chairman Gautam Adani on Thursday said that India needs to become self-reliant in manufacturing of semiconductors. Addressing the India Ideas Summit organized by the US-India Business Council, he said that America’s help will be important in making India self-reliant in the semi-conductor manufacturing ring.

Adani said industries are suffering due to a global shortage of semiconductor chips, which are vital to power everything from cars to computers, aircraft and military equipment.

In his address, he said that the Indian government wants to start domestic manufacturing of semiconductor chips, so that it can be in a position to export them in future.

Adani said that America can be very helpful in making India self-reliant in semiconductor technology. He said, India cannot depend on global supply chains as chips are needed by everyone. Adani also received the USIBC Global Leadership Award during the summit.

What is PM Matritva Vandana Yojana? Know how much money married women get