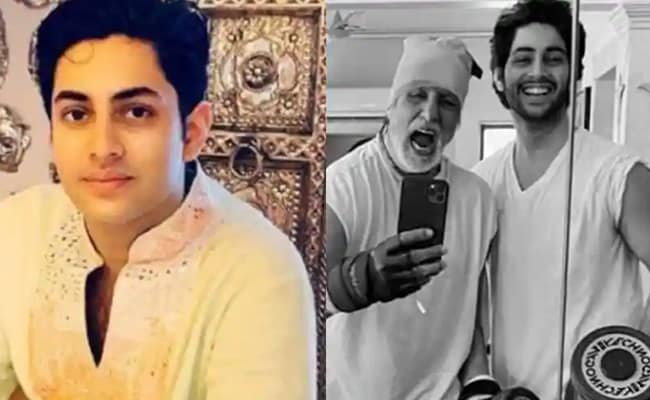 Amitabh Bachchan Grandson Agastya Nanda: Amitabh Bachchan’s grandson Agastya Nanda recently celebrated his 21st birthday. His family celebrated this special occasion in a very special way. On social media, mother Shweta Nanda, sister Navya Naveli and maternal uncle Abhishek Bachchan shared her pictures and wished her on her birthday. Amitabh Bachchan is called the emperor of Bollywood and even today his stardom has not diminished. His films are being released one after the other. Fans are always excited to know about him. Fans are now waiting to see their grandson Agastya from his family in films and now their wait is about to end.

Please tell that after Amitabh, his son Abhishek Bachchan also made a career in films and did many films in his career. Now from the next generation of Amitabh Bachchan family i.e. his grandson Agastya Nanda is also going to make a career in Bollywood.

Agastya Nanda is the son of Amitabh Bachchan’s daughter Shweta Bachchan Nanda and Nikhil Nanda. He is going to debut in Bollywood with Zoya Akhtar’s film The Archies opposite Shah Rukh Khan’s daughter Suhana Khan and Boney Kapoor’s daughter Khushi Kapoor. Amitabh Bachchan has written on social media about Agastya’s Bollywood debut, ‘Agastya a new chapter of your life is starting and we all are very happy about this. This film will be shown on Netflix. Agastya Nanda Jahan will appear in the role of ‘Archie Andrews’. At the same time, Suhana Khan will be in the role of Veronica.

Agastya Nanda was born on 23 November 2000. Agastya has completed his studies from seven oaks school in London in 2019 itself. Shweta Nanda shared the picture of Agastya’s graduation ceremony. Shweta’s elder daughter i.e. Agastya’s sister Navya Naveli Nanda and Shahrukh Khan’s children Aryan Khan and Suhana Khan have also studied in this school in London. Agastya is dressing very much like his maternal grandfather and maternal uncle in the look. After the release of the film, it will be interesting to see whether the fans give him the same love as his maternal grandfather.