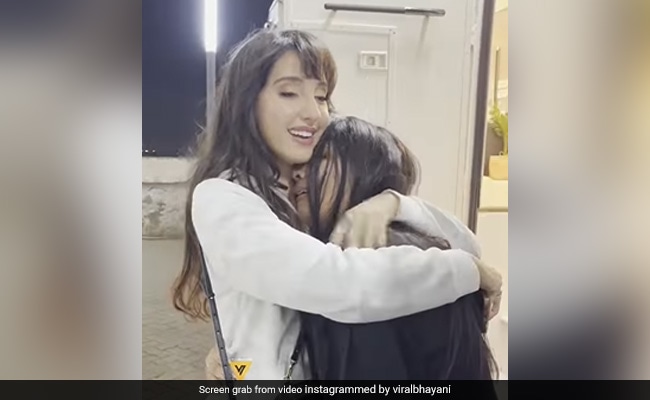 There are many Bollywood actors whose fan following is not only in India but all over the world. One of them is Bollywood’s famous dancer and actress Nora Fatehi. There are millions of people who love Nora. Everyone likes his dance very much. Meanwhile, a video of the actress has surfaced, in which a fan of Nora Fatehi is seen hugging her and crying. Not only this, the fan starts touching the feet of the actress in front of everyone.

Celebrity photographer Viral Bhayani has shared a video of Nora Fatehi and one of her fans on his official Instagram account. In the video, the actress’s fan is seen hugging her and crying. She tells Nora Fatehi crying that she had come to meet him a day earlier too, but left after waiting a long time. Veteran Dance respects him after hearing this and asks him his name.

Fan tells her name Tanya to Nora Fatehi. After this, the actress clicks pictures while posing with her fan. At the end of the video, Nora Fatehi’s fan starts touching her feet. Which she refuses. This emotional video of Nora Fatehi and her fan is becoming increasingly viral on social media. Fans of the actress are very fond of the video. Also giving your feedback by commenting. Let us tell you that recently Nora Fatehi was in the headlines for her song Manike. His song has become a big hit.

Jharkhand: Proposal to increase reservation for OBC and other classes passed in the assembly

Share
Facebook
Twitter
WhatsApp
Linkedin
Email
Telegram
Previous articleGold-Silver Price: The price of gold at the highest level of two and a half months, know why the prices increased
Next articleThany, Thany, Thany… Bullets will come out soon, how is India’s AK-203 over China’s QBZ-191

From Priyanka Chopra to Shilpa Shetty, these Bollywood celebrities are the owners of restaurants