Fans gathered to see Amitabh Bachchan, Big B shared the picture and said- ‘He kept me here and…’ 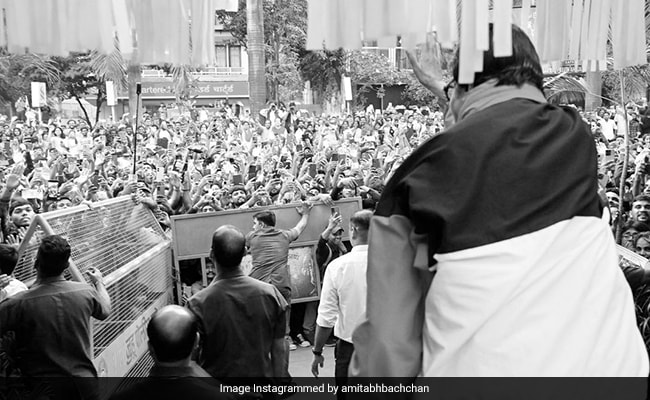 The madness in the hearts of the fans about Amitabh Bachchan, the megastar of the century, is not decreasing. Even today, hundreds of thousands of fans are seen to get a glimpse of Amitabh. A picture that has surfaced on social media testifies to how even today people can do anything for the glimpse of this superhero. Amitabh Bachchan himself has posted this picture, which puts a halt to every rumour. The picture debunks such rumours, in which it is being said that Amitabh’s popularity is decreasing now.

picture is the complete story

Amitabh Bachchan has shared this picture from his official Instagram account, which says a lot in itself. This picture tells the story of fame of an artist who has dedicated many decades of his life to the entertainment world and entertained the audience a lot and will continue to do so. In this picture of Amitabh, a huge crowd of his fans is seen in front of him. Captioning the picture, Amitabh Bachchan wrote, ‘He kept me here..and will always be the reason for our existence..’.

Commenting on this picture, fans are calling Amitabh Bachchan as an evergreen star. Commenting on a fan, wrote, ‘You are doing amazing in 80.. Invincible and tireless.. love this energy, looking forward to seeing you in some more avatars.’ At the same time, another fan wrote, ‘Your existence will never change and will never die.. Even if generations have changed and times have changed.’

Share
Facebook
Twitter
WhatsApp
Linkedin
Email
Telegram
Previous articleDeleting Twitter account may be heavy! Even if you do not want to use, do not make this mistake, know the reason
Next articleRishabh Pant: Will Rishabh Pant get a chance in the semi-finals or Dinesh Karthik’s comeback? Know what Dravid said