Nikki Tamboli’s desi style seen in ‘Chhori’, the actress was seen romancing Tanmay Singh like this 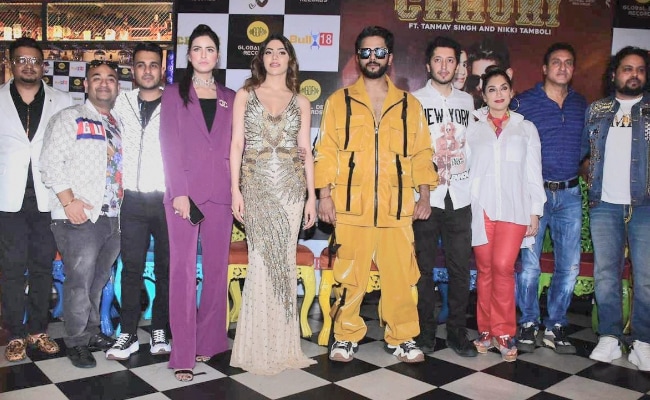 Global Desi Records brings its first offering “Chori”. Big Boss fame Nikki Tamboli and actor Tanmay Singh were seen in the music video of this song. The teaser of this song was given a lot of positive response by the people, it is a song that will surely make people shudder. Danish Sabri, who has written music and lyrics for several Salman Khan and Varun Dhawan films, has penned the lyrics for “Chori”. Composed by Sonu Kakkar and V Kapoor, the song is directed by Aslam Khan and Ravi Akhara. The grand production was shot on a colorful backdrop to perfectly match the upbeat mood of the song.

‘Chhori’ was launched in Bandra’s Angrezi Dhaba with much fanfare, all the people present there listened to this song and started dancing on this song. Shikha Kalra, Aleem Morani and Prateek Chausaria of Global Desi Records said, “Chori is full of excitement and celebration. We are all very excited and all set to make our mark in the music industry.”

Nikki Tamboli says, “I am really looking forward to this song as my passion and love for dance has increased even more and luckily this song is a dance number, people cannot stop themselves from grooving to this song . I am sure my audience will love this track.” Tanmay Singh said, “It was amazing working with Nikki Tamboli on this track and we both channeled our energy and anthosiasm completely into this song. Have tried to bring it. We sincerely hope that you will like this song.”

Sonu Kakkar says, “The style of this track made us go completely crazy with the vocals. It’s a complete masala party song and it was a lot of fun recording it.”

Share
Facebook
Twitter
WhatsApp
Linkedin
Email
Telegram
Previous articleVacancy for 295 posts in Patiala Rail Engine Factory, so many days left for application
Next articleHyundai’s second e-car will be launched in India, 80% charge will be done in 18 minutes

Nowadays this beautiful actress of the song ‘Raat Kali Ek Khwab Mein Aayi’ is living such a life, left films after marriage