Suhana Khan was at the airport and these boys were coming behind, then something like this happened, now the video is being watched again and again 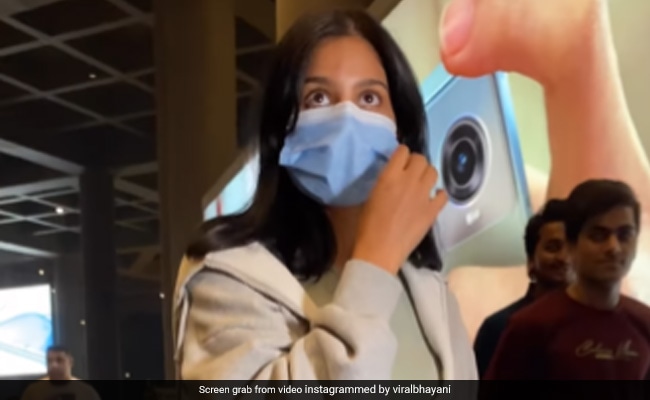 Shah Rukh Khan’s daughter Suhana Khan has become a star even before making her debut in films, media cameras follow her wherever she goes, this star kid is quite popular on social media too. Recently Suhana Khan was spotted at the airport, where she was seen in a casual look. However, something happened with Suhana at the airport, which is now being discussed. This video is very funny and it is being seen again and again on social media.

A video of Suhana Khan from the airport is going viral on social media, in which Suhana is seen in a casual look. Wearing baggy denim and gray colored sweat shirt, Suhana has hidden her face with a mask. In the video, some boys can be seen behind Suhana, these boys are walking behind Suhana, but as soon as Suhana looks back, those boys get shy. It seems that these boys may not be able to recognize Suhana and are giving such expressions by looking at so many cameras at once. Whatever may be the reason, that video is attracting people’s attention on social media.

Commenting on the video, people are asking why the boys behind are shy on seeing Suhana. At the same time, people are also praising Suhana’s looks. Please tell that Suhana is going to debut in films very soon with Zoya Akhtar’s film ‘The Archies’. Boney Kapoor and Sridevi’s younger daughter Khushi will also be seen in this film, this will also be her first film. Along with this, Amitabh Bachchan’s grandson Agastya Nanda is also going to debut with the film.

Share
Facebook
Twitter
WhatsApp
Linkedin
Email
Telegram
Previous articleRoot Canal: If you want to save your teeth from decay, then this is the surest cure for it.
Next articleTwitter Blue subscription will be relaunched on November 29, everyone will have to pay for blue tick

You will be surprised to see the glamorous style of spider sardine, difficult to identify in the photo

Sanjeev Kumar’s film ‘Anokhi Raat’ was the story of a simple guard becoming a dacoit, the film was a hit, the songs won the...