Sunny Leone’s picture seen on the admit card of the exam, everyone was surprised to see this, the matter reached the police 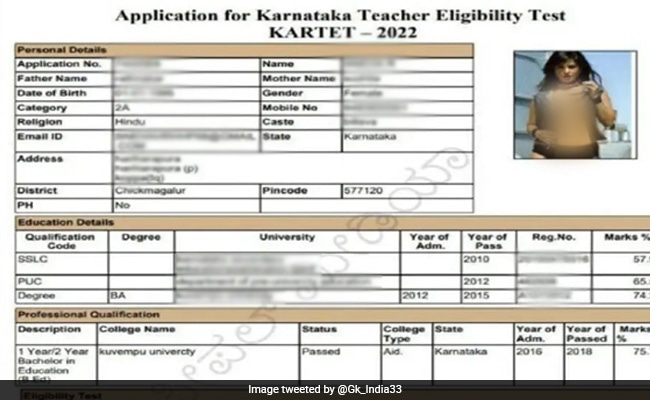 A shocking incident has come to light in Karnataka. A picture of Bollywood actor Sunny Leone has been printed on the exam hall ticket (admit card) of a student who appeared for the Karnataka Teacher Eligibility Test (TET-2022) held on 6 November. After the screenshot of the admit card went viral, the Education Department has ordered an inquiry into the incident. The incident is from Rudrappa College in Karnataka. The incident came to light when a student showed her college hall ticket with a picture of Sunny Leone, following which the principal of the institution lodged a complaint with the cyber crime police.

On the incident, the police have said that there must have been a mistake while uploading the photo in the online application. The student said that she had not applied online. On the other hand, the Education Department has said in a statement that the students have to fill the online application for which a user ID and password is generated, which is only for the students and no one can interfere in it. The department said that it has no role in generating the exam hall ticket as it is only filled by the examiner.

At the same time, the Public Education Department has said in its clarification that the department has no role in whatever is being shown in the media report on this issue. Nevertheless, we have requested the police to investigate the matter and initiate action against those responsible for the incident. Let us tell you that Sunny Leone is one of the famous actresses of Bollywood. She has also appeared in many films of South Cinema. Sunny Leone fan following is very high all over the country.

How Pakistan’s team was rejected in the final