Taimur Ali Khan: Kareena and Saif’s darling son Taimur suddenly got a ball in his empty hand, once again the fans were impressed by the cuteness 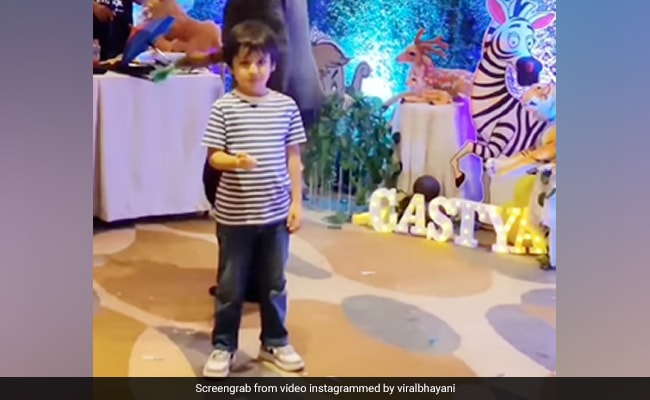 Kareena and Saif’s son Taimur Ali Khan’s name comes on top in the list of Bollywood’s one of the most lovable and cutest star kid. Timur often remains in the headlines of social media due to his cuteness. Once again a cute video of Kareena’s darling son has surfaced on the internet. In this video, Taimur is seen participating in the magic show of a friend’s birthday party. While doing magic with the magician, Timur is seen a little confused and a little happy. So let’s also show you this super sweet video of Taimur Ali Khan.

Taimur Ali Khan was seen participating in the magic show

Taimur Ali Khan, son of Kareena Kapoor Khan and Saif Ali Khan, was recently seen at a children’s magic show. In this magic show, Timur was also seen participating in his magic with the magician on the stage. It can be seen in the video that a million dollar smile is visible on little Taimur’s face after seeing this amazing magic of the magician. You can see in the video that as soon as the magician signaled Taimur to raise his hand, he got confused and extended his hand. After this, the person turned around Taimur and again gestured to him to keep his hand open in front of him. The magician played his trick and Timur looked around. When asked to do so, Timur also closed his hand as he held a flower in his fist. After moving his hand, when the magician asked him to do so, a ball appeared in Timur’s hand. Smiling Timur handed over the ball to the magician and started looking at the audience.

Once again the fans were impressed by the cuteness of Timur

In this cute video of Taimur going viral on social media, his overloaded cuteness fans are very much liking it. Viral Bhayani has shared this video of Kareena’s beloved on his official insta handle. In this video, Timur is seen wearing matching pants in white and blue striped shirt. Earlier recently, Saif and Soha Ali Khan’s sister Saba Ali Khan shared a cute video of Saif and his son Taimur on Instagram. In this video, Taimur was seen sitting on his father’s shoulder. Taimur’s smile is very much liked by the fans, this is the reason that as soon as any video or photo of him comes on social media, the fans shower love on him.

Donald Trump will contest the presidential election in 2024, how strong is his claim?